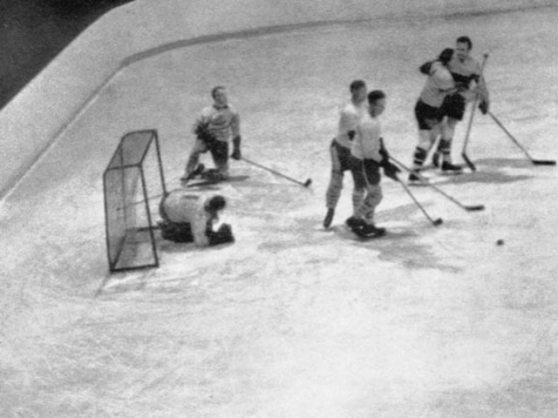 It was an Olympics coated in sportive controversy and by the presence of Adolf Hitler, who used the global sports event as a propaganda tool, three years before the outbreak of the biggest catastrophe in the history of mankind.

In the end, history shows that Canada lost the Gold medal and Great Britain won. The process to that result, however, was anything but simple.

Canada was represented by the Port Arthur Bear Cats and, of course, the team was heavily favoured to win the Gold. Canada had won Olympic Gold in 1920, 1924, 1928, and 1932, and had lost only one meaningful game in international hockey history, that to the USA in the finals of the 1933 World Championship.

But Canada started a commotion two days before the 1936 Olympics were set to begin in Germany. It protested the British entry in the games because two of its players — goalie Jimmy Foster and forward Alex Archer — had apparently played in Canada previously and transferred to Great Britain without first getting proper consent from the CAHA (Canadian Amateur Hockey Association) as international rules demanded. The IIHF agreed with Canada’s petition, but the Brits threatened to pull out if these players couldn’t compete. Just before the opening, in a gesture of goodwill they would later regret, Canada withdrew the protest and the Games commenced without argument.

The Olympics did not end without argument, though. The tournament format called for four preliminary round groups playing a round robin within each. The top two nations from each group (eight in all) then advanced to a semi-final round of two groups of four teams, and the top two from these two groups played a finals round robin among the four final teams. However, it was only after the second round that tournament officials declared that results from that second round would count toward the final round. This was a colossal announcement because Great Britain had defeated Canada 2-1 in that series of games. The decision all but eliminated Canada from Gold medal contention and put Great Britain in the driver’s seat. Both Canada and Germany were furious by the decision.

Canadian official P.J. Mulqueen called it “one of the worst manipulations in sporting history,” and The Times editorial agreed, saying euphemistically, “it is regrettable that the Olympic hockey committee didn’t publicly announce the regulations governing the tournament.” Upon returning to native soil, however, some of the Canadian players placed responsibility for the format confusion on their own officials. Left winger Ralph St. Germain said plainly: “The Olympic rules state that the hockey may be played either on an elimination or point system or both. Either through carelessness or dumbness, the officials neglected to find out what system was being used until after we were defeated by England.”

What was doubly frustrating was that the hero for Great Britain was none other than goalie Foster, who played the game of his life in defeating his former country. The other hero was Edgar Brenchley who broke a 1-1 tie with a goal just 1:12 remaining in the third period. More than 70 years later, though, what remains is Britain’s shocking win against Canada and the nation’s only Gold medal in ice hockey. In the final round, the Brits ensured Gold by hammering the Czechs 5-0 and playing another impressive game in tying the United States 0-0, Foster again making the difference. If the IIHF Directorate gave out awards in this era, Foster would surely have been named tournament MVP.

The eventual Gold medal winners scored a victory already during the opening ceremony when the British Olympic team was told to give the Nazi salute. The ice hockey team refused.