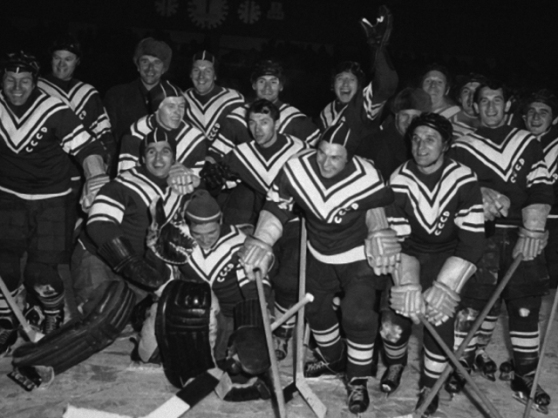 When the Soviets won the 1954 World Championship in Stockholm, their first ever international tournament, they shocked Canada and the hockey world. But by 1956, there was no shock factor heading to the Olympics in Cortina d’Ampezzo, Italy.

Canada had reclaimed the world title in 1955, but it was clear the main competition would come from the newcomer on the World hockey scene. Nonetheless, Canada’s representatives, the Kitchener-Waterloo Dutchmen (with Martin Brodeur’s father Denis as one of the goalies), were not able to provide enough of a challenge for their new rivals.

The Soviet team of 1956 featured many of the same players from the previous two World Championships, most notably goalie Nikolai Puchkov and skaters such as Vsevolod Bobrov, Viktor Shuvalov, Alfred Kuchevski, Valentin Kuzin and Alexi Gurychev. Although the Soviets and Canadians started well in the round-robin, the medal round proved the difference. Canada lost to the United States, a 4-1 shocker, but the Soviets beat all comers.

They started with a routine 4-1 win over Sweden, hammered the Germans, 8-0, survived a brief Czech scare, 7-4, and shut out the Americans, 4-0. Still, the gold medal came down to the final day of the tournament, played outdoors in front of a capacity crowd of 12,700. A Canadian victory meant certain silver and possible gold, and a Soviet loss would have meant a bronze medal.

On this day, however, Puchkov was unbeatable and Canada’s offence was stymied. Canada dominated the first period but couldn’t score. In the second period, Canada was again the better team, but the only goal was scored by Yuri Krylov at 6:20. Canada’s hopes were deflated early in the third when Kuzin scored just 37 seconds after the faceoff, and this 2-0 lead was all the Soviets needed. The victory ensured a gold medal, and the U.S. edged past Canada by defeating the Czechs 9-4 for the silver.

Canada’s bronze was its worst international result since it began competing in 1920, and the Olympic gold for the Soviets ushered in an era of dominance that continued for much of the next 30 years and more. Other than USA wins in 1960 and 1980, the Soviets won Olympic gold every four years until 1992.