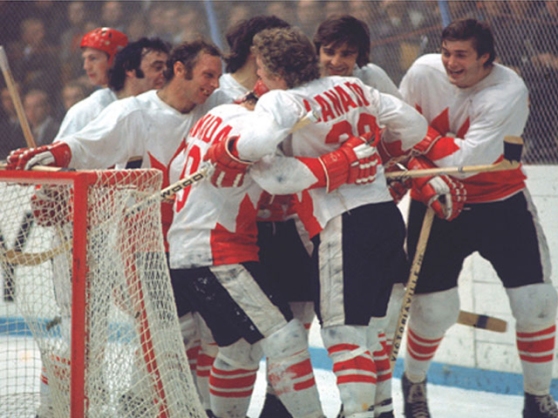 Game Seven was another must-win game for Canada, and it ended in dramatic fashion as Henderson scored the go-ahead goal with just 2:06 left in the game on one of the greatest efforts in hockey history.

It began with the ever-calm Serge Savard flipping the puck out to centre ice while teams were playing four-on-four.

Henderson collected the puck, and he was alone against two Soviet defencemen in front of him and two Soviet forwards backchecking to catch him. Henderson quickly flipped the puck between the defence tandem of Valery Vasiliev and Gennadi Tsygankov, and then skated to the outside around Vasiliev. Henderson caught up with the puck, but he was falling as he let go a shot over the blocker of Tretyak that stunned the goalie and the entire Soviet team. Canada had now tied the series and made game eight the most anticipated hockey game in history.

“It was the greatest goal of my life,” Henderson said of his dramatic game winner. “I can remember thinking I’d have to get the puck upstairs – up high, you know – because the goalie was sliding out in a crouch.”

The series was now even at 3-1-3. One game to go. Everything, literally everything, on the line.