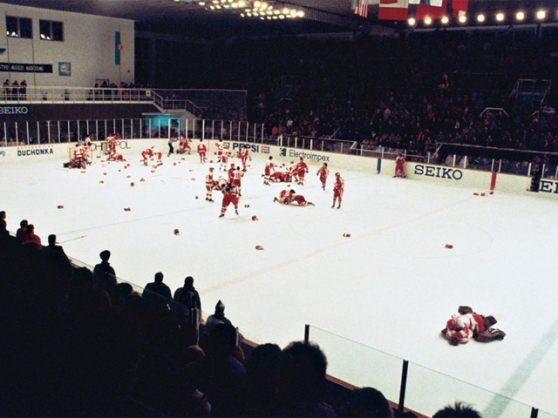 The Canada-Soviet Union junior game on the night of 04 January 1987, in Piešťany, Czechoslovakia, was supposed to decide the Gold medal for the 1987 World Junior Championships. Unfortunately, the final night of the tournament lacked direct drama for both teams because only Canada could win Gold.

The Soviets had a rare off year in ’87, and as they prepared to face the Canadians, their 2W-1T-3L record wasn’t good enough to get them any colour medal regardless of the outcome. Canada, though, was in serious contention. If it defeated the Soviets by five goals or more, it would win Gold. A win of less than five goals would have assured the team Silver to Finland’s Gold.

The game started perfectly for Canada. Theo Fleury scored first, and although the Soviets tied the score just eleven seconds later, two goals before the horn gave Canada a solid 3-1 lead after 20 minutes. The teams exchanged goals midway through the second, but with the score 4-2 the game turned ugly. Soviet forward Pavel Kostitshkin slashed Theo Fleury, and as the two pushed and shoved. After that both teams’ benches emptied and hell broke loose. In his book When The Lights Went Out, written on the occasion of the 20-year anniversary of the infamous brawl in Piešťany, Canadian journalist Gare Joyce can not definitely conclude who started it.

Yevgeni Davydov was first off the ice, but soon all Soviet and Canadian players were on the ice fighting. Norwegian referee Hans Rønning, out of his element, left the ice and ordered arena staff to turn the lights on and off, but it was still many minutes before order could be restored. Of course, fighting in international hockey results in an automatic game misconduct, so the IIHF discipline committee could think of no other resolution to the brawl than to cancel the rest of the game and disqualify the teams since a game misconduct to every player would have left both benches empty.

All players were suspended from international hockey for 18 months, although later the suspensions were rescinded. It was one of the darkest moments in IIHF history and many parties had to assume responsibility. The IIHF and the championship directorate for assigning a referee who was not capable to control a game at this level and the respective teams who were led by coaches who lacked in discipline and who were not able, or even not willing, to restrain their players.

The game had suffered its most ignominious moment, forgettable, regrettable, never to happen again.