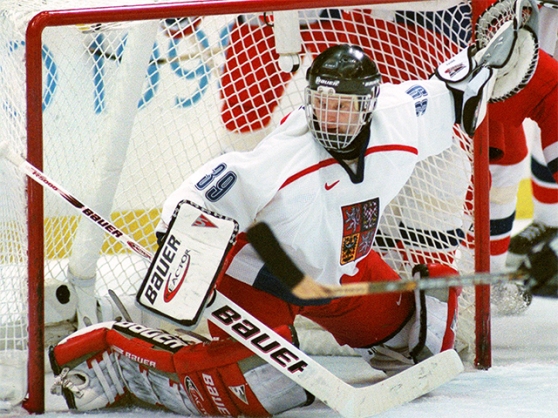 Hašek had led the team to the Gold medal game by stopping all five Canadian players in a semi-finals shootout win, but it was Svoboda who scored the lone goal in the final game of the Olympics against Russia.

The goal came midway through the third period of a scoreless game, and it came on a surprisingly unspectacular play. With a faceoff deep in the Russian end, Czech centre Pavel Patera won the draw from Sergei Fyodorov. Martin Procházka got the puck at the top of the circle and moved it further back to Svoboda at the point, and his hard quick shot beat goalie Mikhail Shtalenkov for the game’s only goal. Amazingly, this was Svoboda’s first appearance with the national team at the senior level, even though, at 32 years of age, he was the second-oldest player on the team. This was his only goal of the Olympics.

As soon as the puck went in, many fans at the Big Hat arena in Nagano celebrated, but tens of thousands more joined in from long distance. A giant TV screen had been erected in Old Town Square in the centre of Prague, and they waved flags, hugged each other, and cheered with pride as the goal was scored. At the end of the game, history had been made. The Czechs had defeated the two most successful hockey nations in the sport’s history—Canada and Russia—to win its first Gold in 78 years of Olympic hockey.

After the medal ceremony, Hašek said: “When I saw the flag go up, I saw my whole career flash before my eyes from the first time my parents took me to a hockey game until now.” The team flew to Prague the next day for a celebratory parade, and estimates of more than a million people in the national capital speak to the win not just as a sporting moment of Czech history but a cultural one as well.

Perhaps, however, the single most important aspect about the win was the makeup of the team. The Czechs used only ten NHLers. The other players came from the Czech Extraliga. The message was clear. European leagues were of very high quality, and, if coached properly, could beat the best from any country on a given day.

The 1998 Olympics weren’t the success many had thought they’d be for Canada and the United States—neither country won a medal—but for European fans and for those who wanted only the best players to participate in the Olympics the message was clear—this is the way of the future.