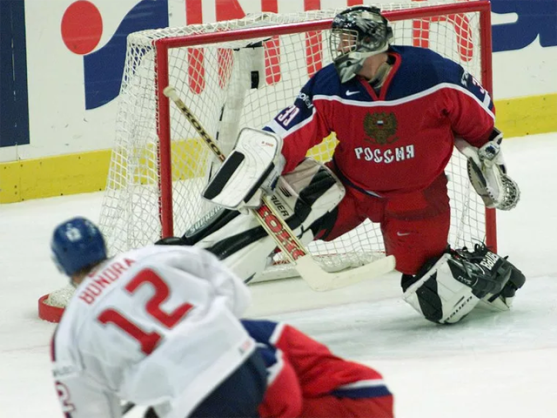 To fully understand the impact of Slovakia’s first World Championship gold medal in hockey, we need to rewind. The dissolution of Czechoslovakia on January 1, 1993, meant that the Czech Ice Hockey Association took over the position of former Czechoslovakia while Slovakia was considered a “new” hockey nation. As a result, the Slovaks had to start from scratch in the IIHF World Championship program and work their way up through the divisions.

They started at the very bottom in 1994 – Pool C – and gained immediate promotion to Pool B after winning that level easily. They also finished on top of the secondary level in 1995 and earned the next promotion, this time to the elite Pool A, in 1996, in Vienna, Austria. The steady improvement of the new national team program didn’t stop there. The Slovaks – with players such as Zdeno Cíger, Pavol Demitra, Žigmund Pálffy and Miroslav Šatan – finished 10th in 1996, 9th in 1997, 7th in 1998, and 7th again in 1999.

The first big success was advancing to the gold medal game against the Czech Republic (!) in 2000 in St. Petersburg. The Czechs demonstrated emphatically who the “big brother” was with a solid 5-3 victory. But the Slovaks nevertheless showed that they – after only seven years as an independent nation – were able to challenge the rest of the hockey world.

2002 was to be an important hockey year: The Olympics in Salt Lake City in February, followed by the World Championship in Sweden two months later. The Winter Games were a sportive disaster for the Slovaks. Never being able to get their best NHL players for the preliminaries they bowed out early and finished 13th.

Head coach Ján Filc said after the Olympic failure that he was sure to get fired, but the Slovak hockey authorities stayed with him for the World Championship, just eight weeks later. This proved to be a wise decision. The clever tactician Filc overcame a preliminary round loss to Finland, but the team wouldn’t lose another one for the rest of the championship, defeating Sweden and Russia in the second round, squeezing by Canada in the quarters (3-2) and edging Sweden in the semis by the same score, but now after a shootout thriller.

In the final, Slovakia would meet Russia again and the Slovaks seemed to be on an easy roll to the gold medal, leading 3-1 after two periods. But the Russians equalized in the third with goals from Vladimir Antipov and Maxim Sushinski and the game seemed to go to overtime. With time approaching 100 seconds left, Žigmund Pálffy found the streaking Peter Bondra with a perfect pass and the NHL-veteran unleashed a heavy shot from the slot. Goaltender Maxim Sokolov attempted a kick save, but the puck hit the inside of the post and ricocheted into the other side of the net.

Time: 18:20.100 seconds left. Several thousands Slovaks in the Scandianvium Arena in Gothenburg knew that there was no way their team would let the Russians into the game again. Very seldom in the history of sports has a team and their fans displayed such an ecstasy following a World Championship win. Team manager Peter Šťastný cried on the bench and said that this was the biggest thing that had happened to Slovakia since the day of independence nine years earlier. Goaltender Ján Lašák kissed the ice along with Richard Lintner and Róbert Petrovický. Peter Bondra and Miroslav Šatan engaged in a long hug.

“This means more than a Stanley Cup to me,” said Bondra, who played for the Washington Capitals. “The Cup is celebrated by one city. This belongs to an entire nation.”

The Swedish organizers, of course hoping that the crowd favourites would win on home ice, had prior to the championship decided that the world champions would be paraded in an open bus cortege through the streets of Gothenburg and treated to a celebration on the main square. Despite a non-Swedish team winning, they still bestowed upon the Slovaks with this honour. Bondra, Šatan, and the other players on the open bus couldn’t believe when the people in the streets of Gothenburg, many of them dressed in Tre Kronor’s yellow and blue, celebrated the Slovak victory as if it were their own. This had never happened before in the history of the World Championships.

Back home in Bratislava, people were waving flags in the streets and squares of Slovakian cities, singing victory songs, and saluting their heroes, calling them gods. Slovakia will never forget 11 May 2002 – the day the concept of the “Top Six” in the hockey world was put to an end. As of this day, there were seven.