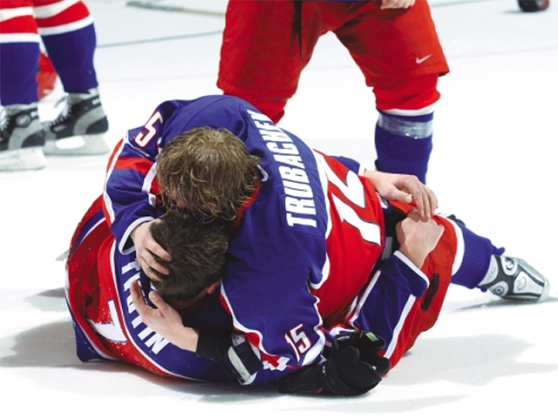 Two third-period goals by Russia took a 2-1 deficit to a 3-2 lead which the Russians held on to win the Gold medal over Canada.

It was the great Russian speed to the outside and their ability to neutralize Canada’s power play that fired the victory.

The line of Igor Grigorenko, Andrei Taratukhin and Alexander Perezhogin was dominant throughout. The goals in the third were scored by Grigorenko and Yuri Trubachyov. Taratukhin also scored, in the first. Scoring for Canada were Pierre-Alexandre Parenteau and Scottie Upshall.

Marc-André Fleury of Canada was named both best goalie by the IIHF Directorate and also tournament MVP as voted on by the media. Grigorenko was named best forward by the Directorate and Joni Pitkänen of Finland the best defenceman. The all-star team, as selected by the media, includes: Fleury (goal), Pitkänen and Carlo Colaiacovo (Canada, defence), and Grigorenko, Upshall (Canada), and Trubachyov (forwards)

Halifax and Sydney attracted 242,173 fans to the 31 games, a new World Junior record.

The anticipated rematch of last year’s final has lived up to the hype. Both teams have been unrelenting in their attacks, and the referee has been very focused on letting them play their physical styles. Jordin Tootoo sent phenom Alexander Ovechkin reeling to the ice with a booming hit in the period, much to crowds the enjoyment.

Ovechkin broke up a Canadian three-on-one late in the period by lying on the ice motionless by the Canadian net. The referee, thinking Ovechkin might be seriously injured whistled down play, and Ovechkin promptly jumped to his feet and played the next shift.

Russia started the game very strong and controlled the action for the first quarter of the period, but Marc-André Fleury was at his most spectacular keeping the Russians at bay. Russia opened the scoring at 11:17 when Andrei Taratukhin got his own rebound and put the puck through Fleury’s five-hole.

The goal appeared to wake up the Canadians who started the game flat. The team knotted the score at one under a minute later when a point shot by Ian White was redirected by Peirre-Alexandre Parenteau passed goaltender Andrei Medvedev.