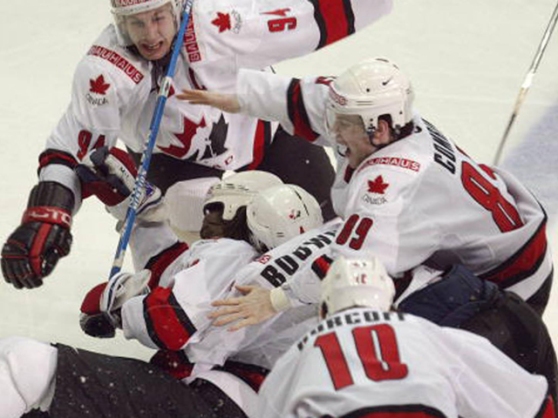 Sweden had defeated host Finland in the most dramatic quarterfinal win in the history of the World Championships, coming back from a 5-1 deficit to top the Finns 6-5 in Helsinki.

Canada had their quarterfinal scare in Turku, barely shaking off a pesky German team, thanks to Eric Brewer’s goal 37 seconds into overtime. But both teams had surprisingly easy semifinals: Canada trounced the Czechs 8-4 while Sweden sailed by Slovakia 4-1.

So two days after the semifinals, it was Sweden vs. Canada in the first Worlds final between those two teams since 1997, also that one in Helsinki. Sweden took a 2-0-lead on goals from Matthias Tjärnqvist and Per-Johan Axelsson, but Canada bounced back thanks to markers from Shawn Horcoff and Shane Doan, the equalizer with ten minutes to go.

So the 13,387-capacity crowd at the Hartwall Areena was to witness yet another overtime thriller, also the first time teams would skate four-on-four in a World Championship gold medal game. This was a phenomenal overtime, with Canada’s Roberto Luongo and Sweden’s Mikael Tellqvist having to make several great saves to keep the game alive. One IIHF official said after the game: “It was so exciting I forgot to breathe for fifteen minutes.”

With the fourteen-minute mark of the OT approaching, Canada’s Anson Carter got the puck in full speed at centre ice and just inside the blueline he released a heavy shot from the right angle. Tellqvist made a partial save with his glove hand, but Carter jumped at the rebound behind the net and attempted a wraparound shot as both he and Tellqvist were racing to get first to the far post.

Carter got the shot away just a split second before the Swedish goalie had reached the other side and the puck slid under Tellqvist’s pads. Nobody in the arena could see if the puck had crossed the line before it eventually came out again, but Carter had the definite feeling that he had scored and started a wild celebration. The entire Canadian team erupted and started to mob Carter, but the joy eventually calmed down when the players saw that the Czech referee Vladimír Šindler approached the off-ice officials bench without calling it a goal. It became clear that Sindler would call upstairs to the video goal judge.

While everyone in Hartwall Areena waited to find out, “is it in?” Halas was busy at work looking at the goal from every angle imaginable to make sure that he got the right call.

“I knew I had to be 100 percent sure,” The Czech-born Halas said. “There was no time for feelings, you have to get it right.”

Being a video goal judge is a thankless job. A mistake in any situation is a blemish, but in this particular situation, with a gold medal on the line, the wrong call would be a travesty in World Championship history. Which is exactly why the instant that referee Vladimír Šindler skated over to the phone to confer with Halas, he knew he better be at his best.

Head referee Šindler had no clear view of the puck on the ice and could offer little help as he was on the left side of the net, while the puck was on the right. Learning this, Halas, started looking at all of the angles from the television feed. After looking at eight or nine different angles, Halas had a gut feeling that he had found the magic angle that revealed the puck had indeed gone in the net.

“I wasn’t certain at first,” Halas said. “It was more of a sense that this was going to be the angle that told us the truth.”

Halas asked the video coordinator to zoom in as much as he could on the lucky angle. After a zooming process that took nearly three minutes, Halas had his answer.

“It was clear from the angle that we choose to zoom that the puck was about 15 centimeters over the goal line,” Halas said.

Meanwhile, the Canadian and Swedish teams were waiting for what felt like an eternity for the ruling to be handed down. While they and thousands of fans waited, Halas, spoke with Šindler on the phone.

“It helped that we both spoke the same language,” Halas said. “We also spoke in English because in this kind of a situation, you want to do everything according to the protocol.”

Fortunately for everyone concerned, no translation was needed when Šindler hung up the phone with Halas and crisply signaled that the goal was good and the gold was Canada’s.

Celebration from the Maple Leaf side of the bench erupted for a second time, while utter disappointment and disbelief was seen on the faces of the Swedes. Meanwhile, somewhere high atop of Hartwall Areena, Pavel Halas sat back knowing he had made the right call — no thanks necessary, just another day in the life of a video goal judge.

For Canada and Anson Carter it was huge. It was Canada’s first World Championship title in six years, while Carter got a heroes’ reception in his home town Toronto. On 15 May, fresh off the plane, Carter was whisked in a limousine to the SkyDome arena where he threw out the first pitch at a Toronto Blue Jays – Tampa Bay Devil Rays baseball game. He was besieged by autograph seekers and well wishers at the park, conducted a lengthy press conference, and then went to a local TV studio to do a half-hour talk show before returning downtown to do more interviews.

The goal not only meant gold for Canada. It also meant that one of the most important goals in Canadian hockey history was scored by a black man. The new face of Canadian hockey excellence was black, and with dreadlocks no less.