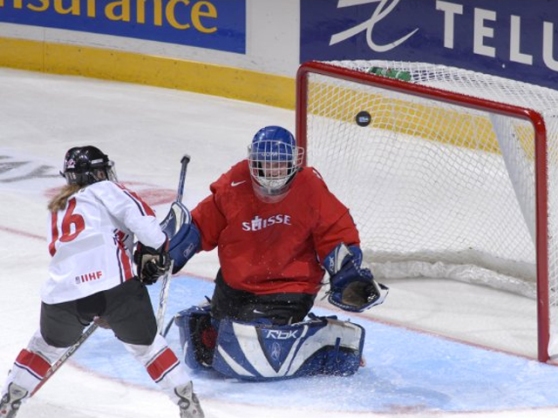 The race to rule women’s hockey is on, and Team Canada picked up right where it left off at the 2006 Olympics, dominating the Swiss 9-0 in its first step toward the goal of regaining the World Championship crown. Canada’s five-goal first period sealed Switzerland’s fate.

In front of 10,706 enthusiastic, mostly white-clad fans at Winnipeg’s MTS Centre (a new single-game tournament attendance record), Danielle Goyette paced Canada’s attack with a hat trick and an assist. This was her first three-goal outing in IIHF competition since an 4 April 2000 win over China. At age 41, Goyette became the oldest female player ever to participate in a World Championship.

“The score doesn’t matter, it’s about the team,” said Goyette. “We had to make sure everybody clicked tonight. The lines did well, and that’s what I’m concerned about.” Captain Hayley Wickenheiser also set the tone for Canada with a goal and three assists. The Shaunavon, Saskatchewan native became the first Canadian ever to reach 250 career points with the National Women’s Team.

Canada outshot Switzerland 63-17 as it gained three points in the standings with a regulation-time win. Canada scored four power play goals, while the Swiss racked up 24 minutes in penalties. It was an excellent start for the host team at both ends of the rink. But Head Coach Melody Davidson will look for an even more consistent 60-minute effort in the games that lie ahead. In the second and third periods, the Canadians got away from shooting the puck with the superb diligence they showed early on.

“With that kind of game and all the special teams, it was hard to keep the units together,” Davidson said. “Our goal was to allow no more than 10 goals against, and to get one goal,” said Swiss Head Coach René Kammerer. “We didn’t get a goal, so that’s not OK, but our team is very proud of this night.”

Just 1:01 in, Canada’s top line opened the scoring. Hayley Wickenheiser burst around the Swiss defense on left wing and set up Gillian Apps in front. Swiss goalie Florence Schelling slid across to make the save, but the puck squirted loose and Danielle Goyette banged the rebound into the gaping net. Canada grabbed a 2-0 lead at the 7:14 mark when Goyette converted Wickenheiser’s cross-crease pass off the rush. At 11:10, Canada went up by three goals on the man advantage, when Wickenheiser finished off a beautiful passing play in the Swiss end with a one-timer from the left faceoff circle.

The Swiss ran into more penalty trouble late in the period, and Canada made them pay. The youth movement came through as Katie Weatherston went to the net and tipped Megan Agosta’s feed high past Schelling with a two-man advantage. It was 5-0 Canada with just 1:10 left in the first, as Jayna Hefford cut in sharply off right wing and roofed the puck past Schelling’s blocker.

The Canadians outshot Switzerland by a whopping 31-3 margin in the opening 20 minutes. Their pace was admittedly more inconsistent in the second period, but they made up for it with two unassisted goals in the last minute. At 19:24, working on the power play, Caroline Ouellette unleashed a wicked wrister from the right faceoff circle through Schelling’s five-hole. Then with eight seconds left before the buzzer, Kelly Bechard gobbled up a rebound to make it 7-0.

Goyette completed her hat trick on the power play at 10:55 of the third period, sliding a low wrister from the right faceoff circle past Schelling’s far skate. That was it for the Swiss netminder, who was replaced by understudy Dominique Slongo. At 12:32, Weatherston took Apps’s pass off the rush and squeezed one past Schelling from the low slot to round out the scoring at 9-0.

Canada’s Player of the Game was Hayley Wickenheiser, and Julia Marty was chosen for Switzerland. Canada’s starting lineup featured Winnipeg native Jennifer Botterill on a line with Meghan Agosta and Jayna Hefford, and a defence pairing of Delaney Collins and Gillian Ferrari.

“I found out at practice (that I was going to start), and I’ve been thinking about it all day today,” said Collins with a relieved laugh. “I sent out a few emails saying I was going to be in the starting lineup. I tried to enjoy it.” It was a festive atmosphere from start to finish. During the opening ceremonies, youngsters skated around waving flags to represent the nine participating nations in the 2007 IIHF World Women’s Championship Winnipeg.

After video-screen messages from tournament chairwoman Polly Craik, Hockey Canada president Bob Nicholson, and IIHF vice-president Walter Bush Jr., a rousing cheer went up when Steve Yzerman, the GM of Canada’s 2007 entry in the IIHF World Championship in Russia, accompanied Florence Murray, the mother of Yzerman’s just-announced coach Andy Murray, to centre ice for the ceremonial puck drop. A choir from Winnipeg Mennonite Elementary School sang “O Canada” in honour of the host nation. Canada can clinch top spot in Group B with a win over Germany on 5 April. The Swiss will face their German-speaking rivals at the MTS Centre the day before.