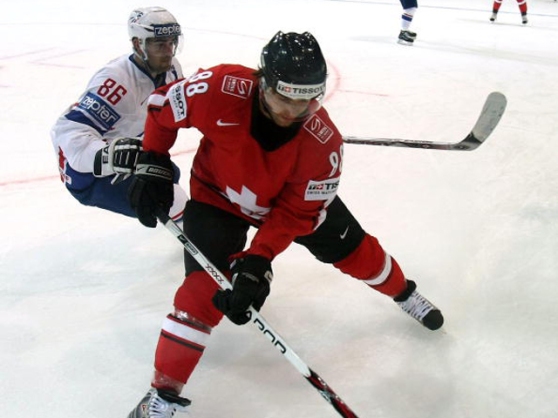 Backed by a capacity crowd of 11,417, Switzerland did what had to be done – not much more – as it beat France 1-0 in its opening game of the 2009 World Championship.

Bern’s PostFinance Arena changed colours on Friday night, as thousands of fans, dressed in red and white, waving thousands of Swiss flags took over the arena. It had been 11 years since Switzerland hosted the World Championship, and both the fans and the team seemed eager to get off to a good start.

“I was awesome to come out and see all the flags and everything in red and white. It was amazing,” Swiss goaltender Martin Gerber said.

Then again, there is that home-ice curse.

Whatever the reason – a curse or just nerves – the Swiss team seemed to have some first game jitters. While it outshot France 14-6 in the first period, nice plays on powerplay were followed by bouncy passes and cautious play at scoring chances.

“We found the players a little bit nervous, going in front of the home crowd and we just couldn’t prepare them enough. Now we have to take that experience and use it to work for us,” Switzerland’s coach Ralph Krueger said.

Fortunately for the Swiss, France took four penalties, handing the momentum to the red and white. The French killed off the Swiss first power play, a 5-on-3, but not anymore when Laurent Meunier got a two-minute penalty for interference. He had been in the sin bin for 55 seconds when Martin Plüss took a pass from Mark Streit, and sent a wrist shot from the point to beat Fabrice Lhenry for the first time.

“I asked my players to play physical, stay disciplined, and work hard, and they did that. We knew Switzerland had a lot of talent offensively and we got into some penalty trouble, but I thought we played well the whole game,” said French coach Dave Henderson.

In the second period, France managed to push Switzerland to their heels, especially during its three power plays, and even got the puck behind Martin Gerber once. The goal was disallowed because Yorick Treille was in the crease as he tipped the puck in.

There was no doubt that the Swiss wanted the win, badly. There was also no need to question their commitment, as the players threw themselves in front of French shots in the third period, and played a little more physical game than in the first two periods.

Despite having several chances in the third period, Switzerland couldn’t extend its lead, even when France replaced Lhenry with an extra skater.

But in the end, the Swiss left the arena as winners, ready to take the next step on their journey.

“We had one primary goal coming to this game, and that was to take the three points, we achieved that,” Krueger said.

“I’m proud of the players, it’s over, we got the win. It’s time to look forward to the Germany game,” he added.

On Sunday, Switzerland takes on Germany, while France meets Russia.