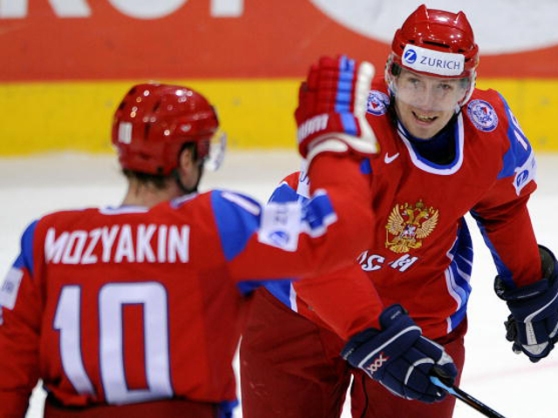 Despite having already secured the top spot in the group, Russia didn’t allow any bad habits to creep into its game, and rolled over Latvia in its last Qualification Round game, 6-1.

Anton Kuryanov and Oleg Tverdovski scored two goals each and Alexander Yeryomenko made 25 saves for Russia. The defending world champions put the game away in the second period, when they scored three goals in a span of three minutes.

“Our first period was good, we had some chances but didn’t score. They scored a few goals in five minutes in the second and that was it,” Latvia’s defenceman Kārlis Skrastiņš said.

“It’s tough to come back against the world champions. Our strength is to be good defensively, and once we were trailing, we had to try to go forward, it wasn’t our kind of game,” he added.

The 2009 game was something in-between, with Russia firmly in command from beginning to end.

“It was difficult to motivate the players to the game which had no bearing on the standings, but they did take it seriously and played well,” Russian coach Vyacheslav Bykov said.

Sergei Mozyakin got the puck behind the net, he went around the net and sent a pass across the crease straight to Anton Kuryanov low on the faceoff circle, and Kuryanov beat Edgars Masaļskis with a wrist shot to give Russia 1-0 lead at 11:43.

Latvian fans got a scare at the end of the period when Georgijs Pujacs was sent off for delaying the game but an Ilya Kovalchuk’s one-timer went wide on an open net.

Russia came strong out of the gate in the second period, scoring three goals within three minutes.

First at 21:01, Ilya Kovalchuk seemed determined to make something happen as he got the puck in the neutral zone. He took it to the Latvian zone, went around two Latvian players and sent a nice pass to Alexei Tereshchenko, who one-timed it to the top shelf on glove side with a slapshot, to make it 2-0.

Two minutes later, Oleg Tverdovski did a Bobby Orr-like end-to-end rush, skating between two Latvian defencemen, then lifting the puck over Masaļskis to give Russia a three-goal lead at 23:04.

But the fireworks weren’t over. At 23:50 Russia scored again as Kuryanov and Alexander Perezhogin tic-tac-toed the puck through the Latvian defence, to Perezhogin, who took a shot. Masaļskis made a leg save but the rebound came to Kuryanov, who sent the puck in with a backhander for 4-0.

Not the start Latvia had wanted for the second period.

With 3:55 remaining in the second period, Russia got a taste of its own medicine when Latvia struck on power play. Guntis Galviņš sent the puck to the net from the blueline, and Herberts Vasiljevs’ deflection caught Alexander Yeryomenko by surprise and put Latvia on the board, 4-1.

Latvia got off to a bad start in the third period as well. Alexander Frolov carried the puck to the Latvian zone, and as a Latvian defenceman tried to stop him at the faceoff point, he did a spin-o-rama, and as he turned he sent the puck to the back of the net with a backhand shot beating Masaļskis on the stick side, to make it 5-1 at 43:38.

Still not enough for Russia.

At 46:28, Oleg Tverdovski made it 6-1 with his second of the night with a slap shot from the faceoff circle, assisted by Sergei Zinoviev, who sent a nice cross ice pass to Tverdovski.

“I’m proud of the team, now we just have to wait and see. I believe we’ll make the quarterfinal. We’ve played a great tournament,” Latvia captain Skrastiņš said.