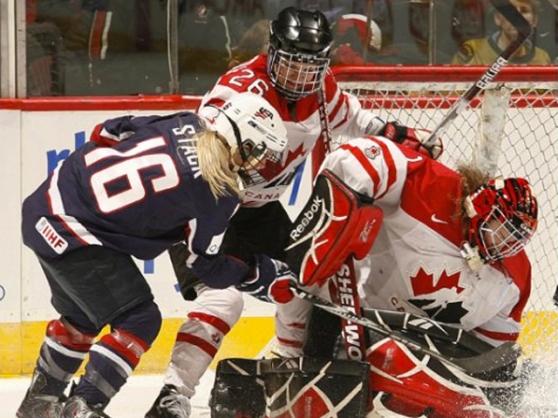 Jayna Hefford of Kingston, Ontario, scored a pair of goals to pace the Canadian women’s hockey team a 6-2 win over the U.S. in Tuesday’s exhibition game.

Hefford and linemates Caroline Ouellette of Montréal and Meghan Agosta of Ruthven, Ontario, were standouts as the trio combined for three goals in the first two periods.

Ouellette had a three-point night with a goal and two assists, while Agosta assisted on three goals. Marie-Philip Poulin of Beauceville, Québec, Gina Kingsbury of Rouyn-Noranda, Québec, and Scarborough, Ontario’s Cherie Piper contributed for the hosts in front of about 6,500 at Pengrowth Saddledome.

Meghan Duggan and Monique Lamoureux replied for the Americans, who fell to 0-4 against Canada in a six-game exhibition series both countries are using as preparation for the Olympics in February.

The series concludes with games 30 December in Saint Paul, Minnesota, and 01 January in Ottawa.

The U.S., winner of the last two World Championships, is 3-1 versus Canada in tournament play since September.

Edmonton’s Shannon Szabados earned the win in net with 20 saves. The 23-year-old is 3-1 against the U.S. since the Canadian team centralized in Calgary in August.

Trailing 2-1 early in the second, Canada scored three straight goals to take a lead into the third period. They capped the scoring with two more goals within half a minute of each other midway through the third.

Piper won a footrace to the puck and scored on a breakaway at 9:53, just 18 seconds after Kingsbury batted the puck through Schaus’s pads on a feed from Jennifer Botterill.

Poulin’s wrist shot from the edge of the faceoff circle beat Schaus for Canada’s first power-play goal of the game at 18:38 of the second period.

Hefford gave the hosts the lead for the first time at 16:39 when she stepped out from corner and put a sharp-angle shot off Schaus and in the net.

She was the finisher on an odd-man rush with Ouellette and Agosta to tie the game at 10:46.

Lamoureux gave the U.S. a 2-1 lead by driving the net and pushing the puck past Szabados for a power-play goal at 4:44.

Neither side was able to establish much flow or momentum in the first period, with seven minor penalties called in the opening 20 minutes.

Ouellette tied the game late in the second period. Hefford caught American defenceman Kacey Bellamy pinching along the boards and her burst of speed down the wing gave her time to brake and dish to Ouellette at 17:42.

Duggan opened the scoring with a power-play goal at 11:51 of the first period. Jinelle Zaugg-Siergiej’s shot off the faceoff rebounded out to Duggan, who beat Szabados stick side.

Both teams will soon release two players to get down to their 21-woman Olympic roster.

As of this year, women’s teams are allowed to carry three goalies to international events, so both countries will cut two skaters.

The U.S. will announce its Olympic team Thursday in Minneapolis.

Canadian head coach Melody Davidson has not revealed when she’ll name her final roster, but it’s believed she will do so before the players head home for the holiday break next week.

“We’ll sit down on the weekend and see if we’re ready to make a decision or not,” Davidson said.

She’s been mulling whether to keep the players as alternates to continue practicing with the team in the event of an injury.

“I would foresee that we’ll keep at least one person,” Davidson said.

Canada is on the road against men’s midget teams Thursday and Friday in Medicine Hat and Lethbridge respectively.

Captain Hayley Wickenheiser believes once players feel more secure in their position on the team, they’ll play with more confidence.

“We all know the cuts are coming within the next week or so I think,” she said. “We still have a ways to go to improve and that will help.”

NOTES: Piper’s goal was her 100th career point for Canada…Ouellette surpassed the 100-assist mark with her three…Canada’s scratches were Jennifer Wakefield (broken hand) and uninjured defenceman Colleen Sostorics and goaltender Charline Labonté…Sitting for the U.S. were defender Lisa Chesson and goaltender Brianne McLaughlin.