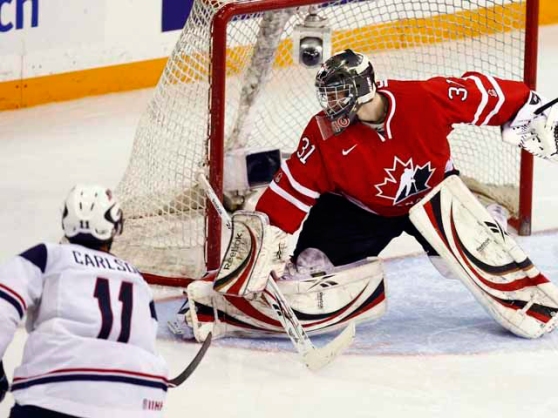 Following a pad save by Jack Campbell, Team USA skated up ice on a three-on-one odd-man rush. Carlson glided in on the wing and fired a quick snap shot past goalie Martin Jones for the championship-winning tally.

“We put the right team together for this tournament, filled with gritty, hard-working players,” said Dean Blais, head coach of the U.S. National Junior Team. “Our guys battled the whole tournament, and we’re very happy to come away with the gold here in Saskatoon.”

Canada took an early 1-0 lead on a backhand goal by Luke Adam two minutes into the game. Team USA responded with back-to-back goals later in the period, however. Chris Kreider fired a wrist shot from the left circle over the glove of Canada starting goalie Jake Allen 14 minutes into the period. Then, just 30 seconds later, Jordan Schroeder gave Team USA a lead with a wrist shot high to the short side.

After Canada tied the game to end the first period, Team USA regained the lead one minute into the second on the power play. Carlson let go a long slap shot from the point that beat Allen low to the stick side. But Canada answered once again, knotting the score, 3-3 after two periods.

Team USA took its third lead of the night four minutes into the final period. Captain Derek Stepan broke into the Canada zone on a two-on-one break and fed Jerry D’Amigo, who gave the U.S. a 4-3 edge. Stepan then extended his team’s lead to 5-3, flicking a backhand shot into the net after Allen failed to handle a long shot cleanly.

Canada scored twice in the period’s final three minutes, including once on the power play, to send the game into overtime. But Team USA emerged with the victory, the second-ever gold medal for the U.S. in tournament history.

Campbell earned the win, turning aside 32 of 34 shots faced in just over 40 minutes of work after relieving Mike Lee in the second period. Meanwhile, Jones took the loss, making eight saves after replacing Allen in the third period.

NOTES: Derek Stepan, who finished as the tournament’s leading point-getter with 15 (5-10), was named Team USA’s Player of the Game. With 15 points, Stepan tied Mike Modano (1989) for the third-most points ever scored by a U.S. player at a World Junior Championship. Stepan’s 10 assists tied Phil Kessel (2006) for second most in U.S. single-tournament history…Stepan and John Carlson were named to the tournament’s Media All-Star Team…Team USA’s other gold medal at a World Junior Championship came in 2004, when the U.S. defeated Canada, 4-3, in Helsinki, Finland. The gold medal marks Team USA’s sixth overall medal at the tournament since 1977…Sweden defeated Switzerland earlier today, 11-4, to win the bronze medal.