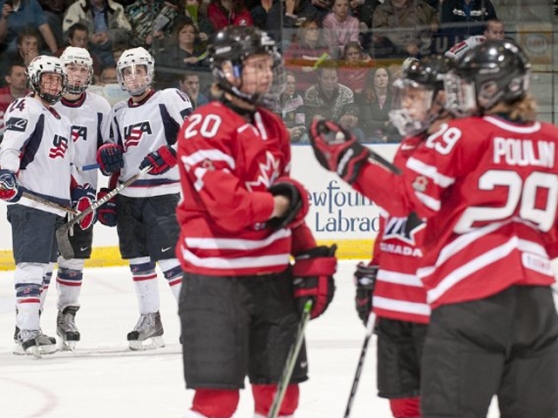 Canada’s National Women’s Team edged the United States 3-2 Saturday night inside the Mile One Centre, where the largest crowd ever to attend a gold medal game at the 4 Nations Cup watched as Rebecca Johnston scored the winning goal in a thrilling overtime period.

In total, 5,459 fans purchased tickets for the final game of the 2010 4 Nations Cup, held in St. John’s and Clarenville, Newfoundland from Tuesday, 9 November to Saturday, 13 November. Overall attendance at this year’s 4 Nations Cup is also record-breaking, with 29,218 fans attending eight games over the course of the week.

The crowds in Newfoundland and Labrador beat those who attended the 2002 4 Nations Cup in Kitchener, Ontario, where Canada defeated the United States 4-2 for the gold medal. About 5,400 fans attended the gold medal game in 2002, with 24,408 people total attending all games at the Kitchener tournament.

Canada has now won 12 gold medals and three silver medals at 15 total 4 Nations Cup, including last year in Vierumäki, Finland. The United States has won gold at the international tournament three times, the last in 2008 in Lake Placid, New York. The inaugural tournament was held in 1996 in Ottawa, Ontario.

In the gold medal game, Johnston also opened the scoring at 16:46 in the first to put Canada up 1-0 going into the intermission.

The Americans staged a brief comeback during the second period, with Julie Chu and Kendall Coyne both scoring for a 2-1 lead. But defenceman Meaghan Mikkelson capitalized on a power play at 18:11, with Irwin and Agosta again assisting, to tie the game up at two apiece.

The third period was scoreless, sending the gold medal game into overtime, with Johnston picking up a rebound at 6:21 in the extra period and using handy stick work to put it past the American goal line and give Canada’s National Women’s Team the 3-2 gold medal win.