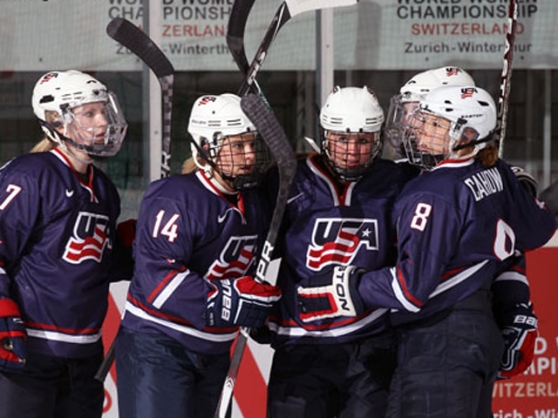 The United States scored four first-period goals en route to an easy 9-1 win over Sweden in the final game of the Preliminary Round of the World Women’s Championship. Leading the way was Jen Schoullis and Meghan Duggan with two goals each.

It was a dominating performance that gives the U.S. a bye directly to the semi-finals. Sweden will now play Finland in one crossover quarter-finals while Switzerland and Russia will play in the other. Both games will be in Zürich on Good Friday.

The Americans had goals form seven different players and 13 of 17 skaters earned at least one point. It was a surprisingly one-sided game, and goalie Jessie Vetter had very little work to do this night.

“We came out firing on all cylinders and took it to them the first two periods,” Schoullis said. “We kept our feet moving, and that sent us on our way.”

After a torrid beginning in which the Swedes skated stride for stride with the U.S., the Americans struck first on the power play. Brianna Decker carried the puck into the Swedish end and found Kelli Stack in the slot. Goalie Sara Grahn stopped the first shot but Stack nailed the rebound with one quick shot to give the Americans the crucial 1-0 lead.

Schoullis made it a 2-0 game midway through the period when she walked out from behind the bet untouched and snapped a quick shot between Grahn’s pads. The floodgates opened three minutes later when the Americans converted a pretty 2-on-1 off the rush. Monique Lamoureux-Kolls redirected a perfect pass from Stack to make it 3-0.

Jenny Potter (née Schmidgall) put a nail in the first-period coffin for Sweden by roofing a backhand from in close at 19:54 to send the Americans to the dressing room with a virtually insurmountable 4-0 lead. After that it was no contest, only a matter of how many goals the Americans would score.

Coach Niclas Högberg mercifully pulled Grahn soon after the eighth goal and inserted Kim Martin. The Americans got one on Martin before the end of the period to make it 9-0 after 40 minutes. Erika Grahm broke the shutout early in the third period, banging a puck in from the side of the goal while Sweden was on a power play and a delayed penalty.