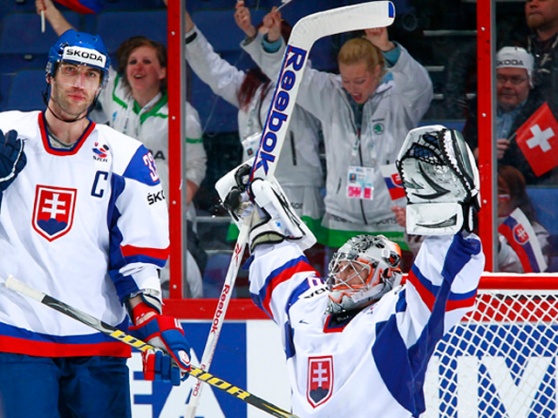 Tomáš Tatar’s goal at 18:13 of the first period stood up as the only score of the game, giving Slovakia a critical 1-0 win over Switzerland.

Goalie Ján Laco stopped all 21 shots to record the shutout. The win inched Slovakia closer to a quarter-finals appearance while the loss eliminated Switzerland from that possibility.

“It was a tough game and a very frustrating loss,” said Nino Niederreiter, one of the young Swiss stars who is being looked to as the future of the team. “We threw a lot of pucks on their net but obviously not enough. We needed to have more net presence.”

The only downside was that Marcel Hossa appeared to injure his hand when he was hit from behind and fell awkwardly into the end boards. The play occurred early in the second period, and he didn’t return.

Incredibly, it was the 13th shutout of the tournament in 45 games and the third game with only one goal. The only way Slovakia could not qualify is if France beat Belarus tomorrow and then the Slovaks on Tuesday. If that were to happen, France would finish fourth in Group A and play in the quarter-finals.

“We still have to win one more game, and that’s what we focus on,” said Tomáš Kopecký. “We’re not in the quarter-finals yet. If we get there, it’s going to be tough no matter who we’re going to play.”

An otherwise listless period ended with a bang when Michel Miklik checked Roman Josi off the puck behind the Swiss net. Juraj Mikúš picked the puck up and fired a quick pass in the slot that Tatar snapped home to give the Slovaks a crucial 1-0 lead.

Tatar is easy to spot on the ice because he is the only Slovakia to wear red gloves, all his mates favouring the more matching blue. “It was probably the most important game of the tournament for us,” Tatar said. “We played a really good game.”

If Switzerland had a slight edge in play in the opening period, Slovakia had a decisive advantage in the second. The team had plenty of shots at Reto Berra, who was rock solid in the Swiss net.

At the other end, the Slovaks did a great job of keeping the Swiss to the outside in their end, and Laco had few shots of quality to deal with. Mário Bližňák had a great chance to make it 2-0 but fired high and wide, and Branko Radivojevič misfired on a one-timer with another fine scoring chance.

Slovakia was superb in defending in the third period, and any last-minute hopes for the Swiss were dashed when Fabien Brunner took a needless penalty with 1:45 to go. It was one of only three minors called in the game.

Slovakia closes out the Preliminary Round with an afternoon game against France on Tuesday while Switzerland finishes up with the United States that same evening.