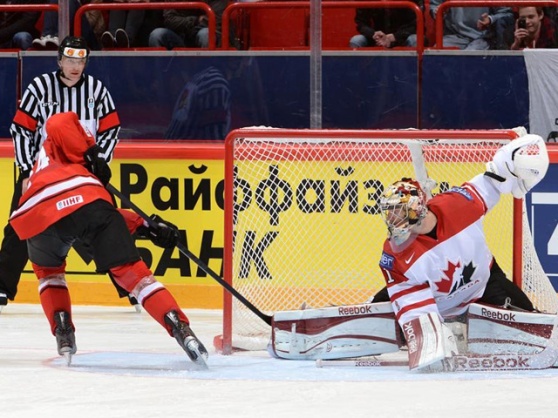 Reto Suri’s second goal of the shootout, in the eighth round, gave Switzerland a 3-2 victory over Canada.

These were his first career shootout goals and gave the Swiss their second win in the tournament after defeating Sweden on the opening day.

It was also just the second win at the Worlds for the Swiss in 28 all-time meetings with Canada stretching back to 1934. The first came at the 2010 World Championship, the first tournament under coach Sean Simpson.

“The key to our win was defence and being able to skate on the big ice,” said Swiss forward Nino Niederreiter, who scored for the second straight game. “In the third period we were feeling that we could achieve something here and did not accept that it was 2-1 in their favour.”

Canada (1-1) now has a day off before playing Norway on Tuesday. The Swiss (2-0) play tomorrow against the Czech Republic.

“Every team can beat every team,” offered a delighted Philippe Furrer. “We have continue playing our system, be patient and take advantage of chances that come up. This game shows how successful we can be when we do that.”

Suri scored earlier in the shootout when his shot dribbled under the glove of Mike Smith and over the goal line. Matt Duchene then calmly scored for Canada to extend the game-winning shots contest. Duchene later missed on two further attempts including the final one.

Switzerland dominated the first period by playing a Canadian game. It played physically, went hard to the net, and played sound defensive hockey around goalie Martin Gerber. The only penalty of the first period was a double minor to defenceman Stéphane Robidas for high-sticking, but the Canadians killed it off in expert fashion.

The Swiss, though, got a justly deserved goal a few minutes later. Morris Trachsler stripped the puck from Claude Giroux who carried the puck lazily through the middle of the ice, and Julian Walker made a nice drop pass to Denis Hollenstein on the ensuing two-on-two. Canadian blueliner T.J. Brodie backed up too deep into his own end, and Hollenstein ripped a one-timer past a screened Mike Smith, who was a little back in his net.

At age 31, Smith, who is without question the best puck handler among the goalies in this year’s World Championship, was making his Team Canada debut (at any level). He was solid if not excellent throughout as the Swiss had the greater number of scoring chances.

The Canadians did what they did in their first game by coming out harder in the second period, but the Swiss were up to the task. They continued to play solid hockey and didn’t give up too many odd-man rushes or great scoring chances.

Nonetheless, Canada evened the score at 14:33 on a scrambly play off the rush. Steven Stamkos made a hard cross-ice pass coming in over the blue line, but it was redirected behind the net. It came out the back side, though, and Luke Schenn was right there. He ripped a hard pass to the top of the crease where Andrew Ladd was cutting in, and Ladd redirected the puck past Gerber to make it a 1-1 game.

Undaunted, the Swiss continued to skate with Canada and showed no letdown after the goal. Indeed, Matthias Bieber had the best chance the rest of the period but blasted a shot over Smith’s net.

Matt Read’s goal at 7:35 of the third broke a 1-1. Read chased down a puck the Swiss had thought would go for an icing call. He got it to Jordan Eberle behind the goal and took a return pass out the back side of the goal. Read snapped a quick shot from a bad angle past a surprised Martin Gerber.

The Swiss responded, though, off a wild scramble. They hit the crossbar, and with a melee of players in the crease, Nino Niederreiter pushed the puck over the goal line. The play was confirmed by video review.

“We had a lot of chances,” said Niederreiter. “The goal to tie was a scrum in front of the net. The guys were really pushing for the tying goal and finally the puck went in.” That tying goal set the stage for an uneventful overtime and then Suri’s heroics in the shotoout.