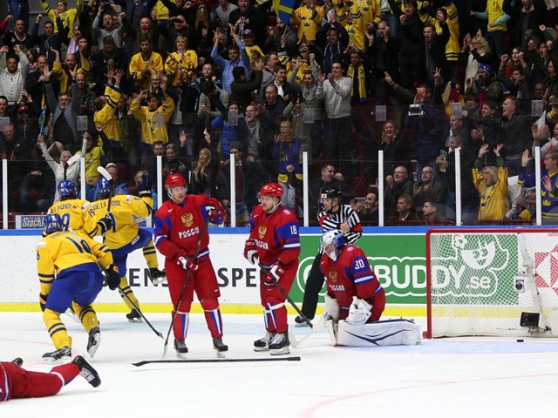 Russia’s seeding depends on the outcome of the Finland–Switzerland game, the round-robin closer. The Russians, who came back from a 2-0 deficit with two power play goals but couldn’t seize the victory, will be either second or third in the group.

De la Rose went to the front of the net and tipped Gustav Olofsson’s point shot past Russian goalie Andrei Vasilevski with 2:22 left.

“It feels really amazing right now,” said de la Rose. “It was a great goal for us and we really needed it.”

It was an amazing atmosphere again at the Malmö Arena, with 11,528 mostly yellow-clad fans stacked to the rafters, and constant clapping and cheering that rivalled anything witnessed at recent IIHF World Championship games in Sweden.

“I thought we were really close to getting three points in this game,” Grigorenko said. “It was 2-2, and Sweden was a little bit luckier than us at the end. I guess we had too many penalties today. We can’t really do that against teams like that.”

“Obviously our goal was to win the group,” said Swedish captain Filip Forsberg. “Now we’ve done that. But now the tournament really starts with the playoff games. We have to get ready for the quarter-final here.”

In a showdown between two of the tournament’s top goalies, Sweden’s Oscar Dansk prevailed over Vasilevski. Shots on goal favoured Sweden 32-25.

Puck possession ruled the day, and coach Rikard Grönborg’s crew did a better job on balance.

Clearly, both teams were determined not to give an inch defensively from the start, backchecking with zeal. Sometimes it went a little too far.

At 2:23, Russia’s Georgi Busarov ran Oskar Sundqvist from behind into the boards at the Russian bench. The Swedes made them pay on the power play just over a minute later. The Russians were trying to clear the puck when Sebastian Collberg grabbed it in the middle of the ice and dished it across to Andreas Johnsson, who beat Vasilevski on the stick side.

Sweden continued to test the Russian netminder, who had to be sharp when Erik Karlsson cut to the net past the defence and knifed a dangerous backhand. The Russians struggled to get their attack going, taking the next three minor penalties.

With under four minutes left in the first, Damir Zhafyarov nearly finished off a dandy solo rush, splitting the Swedish defence but failing to get the puck past Dansk’s right pad.

At 17:01, Sweden seized a 2-0 lead. Wallmark got the puck to Andre Burakowsky behind the Russian net, and he put it in the slot to Nick Sörensen, whose shot arced past Vasilevski.

The Swedes nearly got a third goal in the final minute of the first, Jesper Pettersson whiffing on a wide-open net with a delayed penalty coming up to Russia.

At 4:47 of the second period, the Russians cut the deficit to 2-1 on the power play after some excellent pressure. Vyacheslav Osnovin centered it from the corner to Barabanov, who tipped it past Dansk.

Halfway through the game, Russia got caught with too many players on the ice, but Tre Kronor couldn’t take advantage on the power play. Forsberg rang one off the crossbar. Seconds after the man advantage expired, Vasilevski made an incredible close-range save on Elias Lindholm after Forsberg found him in front with a perfect pass.

Russian assistant captain Andrei Mironov nearly tied it at the end of the second, firing a howitzer that deflected up and off Dansk’s right post.

Johnsson gave Russia another great chance early in the third after he was nabbed for knocking over Vasilevski. But the Swedes weathered the Russian onslaught as the crowd jeered their foes with deafening whistling.

Russia made it 2-2 on the power play with 8:08 left in the third. Grigorenko, standing in front, smartly tipped Pavel Buchnevich’s rising shot past Dansk.

“It was a power play, and our other unit started the power play,” said Grigorenko. “It wasn’t really working well. When we changed, I wasn’t supposed to be in front of the net, but the situation was that I was just next to the net. Buchnevich tried to make a one-timer, I think, but he missed it a little bit. I just redirected it and it went in.”

Swedish buzzsaw Anton Karlsson sat this one out with a shoulder injury.

The last time Russia beat Sweden at an IIHF World Junior Championship was 03 January 2011, a 4-3 win in a semi-final shootout. The Swedes won the following three times prior to this encounter, including Mika Zibanejad’s 1-0 overtime winner in the 2012 Gold medal game in Calgary.

“I think we’re pretty confident,” said Sörensen. “We’re playing in front of a big crowd and we know everyone’s behind us. Five-on-five, all over the ice, and except on the power play, I think we were the better team. If we can come back against the Russians and get a goal in the end and not be too worried, it shows a lot of strength for the playoffs.”