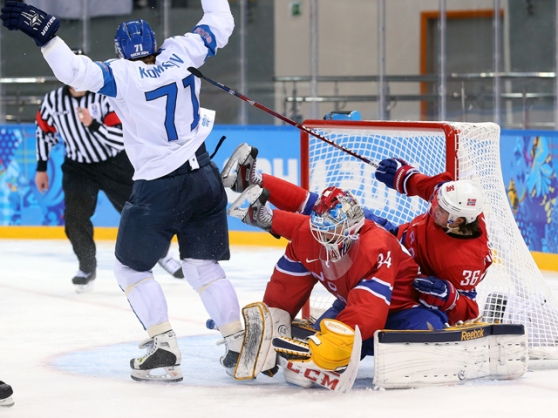 Teemu Selänne scored the first goal and Finland never looked back in a 6-1 romp over Norway. The Finns will face Canada for top seed in Group B on Sunday.

At the age of 43 years, 7 months and 11 days old, Selänne became the oldest player ever to score at the Olympic Games. It’s another remarkable achievement for the “Finnish Flash,” appearing in his sixth Winter Games, which ties Raimo Helminen’s record.

“It makes me feel very old,” Selänne said with a laugh. “I think it’s awesome. It’s fun still for me.”

The top seeds in each group, as well as the best second-place finisher, all receive byes to the quarter-finals on Tuesday.

Goalie Kari Lehtonen made his Olympic debut for Finland on Friday at Shayba Arena, with Antti Niemi serving as his backup. Tuukka Rask got the night off after beating Austria 8-4 in the opener.

Of facing Canada, Lehtonen said: “They would beat the top lines in any NHL team. It’s a tough task for goalies. If I get to play that one, it’ll be exciting.”

Versus Norway, Lauri Korpikoski scored twice, Olli Määttä had a goal and two assists, Olli Jokinen potted a goal and an assist, and Jori Lehterä had a single for the unbeaten Finns. Tuomo Ruutu added a pair of helpers.

Lars Haugen started between the pipes for Norway for the second straight game, but was pulled in favour of Lars Volden after allowing three first-period goals on 13 shots.

The Finns just had too much speed, skill and aggression for the Norwegians to handle. They tightened up their defensive play compared to the haphazard start they had against the Austrians.

“I think it was good we played better on the defensive side,” said Korpikoski. “We improved over our last game where we were a little soft in our end.”

Selänne, the Finnish captain, was in fine form as he returned from an upper-body injury he received in the first period versus Austria.

At 5:46, Selänne took a short pass from Anaheim Ducks teammate Sami Vatanen in the neutral zone, swooped into the Norwegian zone, and unleashed a wrister that beat Haugen high to the glove side.

“Teemu is very important for us,” said Finnish coach Erkka Westerlund. “He’s our captain and role model for younger players. He’s a good person. It’s always a good atmosphere around him. He plays with young boys, (Alexander) Barkov and (Mikael) Granlund. His mind is so young.”

Just 1:05 later, the Finns made it 2-0 when Olli Jokinen fired a shot from the slot and Korpikoski swatted in the rebound.

With 2:39 left in the first, Lehterä stepped over the blueline and fluttered a long shot down the middle past Haugen’s glove. It clearly wasn’t the Norwegian starter’s night.

“I think we didn’t do a good enough job coming back as forwards,” added Norway’s Patrick Thoresen. “The defence didn’t have enough support from the forwards and had to back off. They were able to take two good shots from a position in the slot area. To beat Finland, we’d need to be stronger in front of the net and keep them on the outside, like we did against Canada.”

There was a more physical tone in the second period, and again, that favoured Finland. Even when the Norwegians managed some pressure, the Finnish defenders collapsed effectively around their crease and didn’t let their opponents get to the rebounds.

At 8:03, Finland took a 4-0 lead, as Korpikoski stood in front of the Norwegian net and deflected in an Olli Määttä centre point drive.

At 11:26, Olli Jokinen made it 5-0 when he accepted a nice Sami Salo pass, burst through a hole with the Norwegian defence backing up, and sent a wrister from the hash marks past Volden’s glove.

In the third period, Skrøder spoiled Lehtonen’s shutout bid at 1:01 on a 5-on-3 power play with Selänne and Tuomo Ruutu in the box.

Barkov did not play in the third. Westerlund said he had a lower-body injury, but it was unknown how serious it was.

Määttä rounded out the scoring for Finland, rushing in to convert a rebound with 2:19 remaining.

“It was a tough game for us,” said Norwegian coach Roy Johansen. “Finland is a team with high tempo and good skills.”

“It’s unbelievable what he can do at 43,” said Korpikoski. “You don’t really think when you see him skating that he’s 43. He looks like 25. It’s remarkable to see what he’s done for Finnish hockey.”