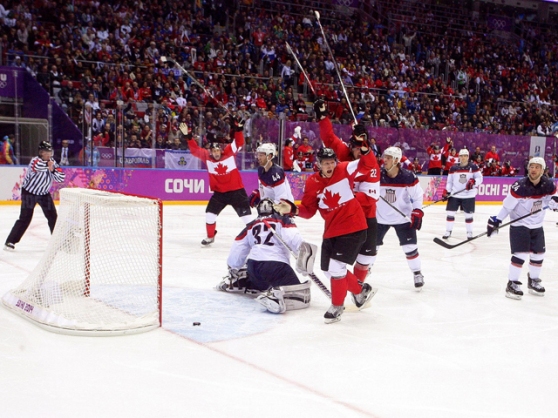 Sidney Crosby was dangerous all night and the Weber-Doughty duo were remarkable, but Jamie Benn was the hero in leading Canada to the Gold medal game on Sunday.

It was the goalies, however, who shone brightest. Carey Price was perfect on the 31 shots he faced while Jonathan Quick allowed only one impossible-to-stop goal and made many great saves on Canada’s 37 shots.

“That defensive group in front of me plays very well,” Price enthused. “They’re very good at boxing guys out and letting me having my eyes. Our forwards backchecked really hard tonight. I think that was the difference.”

Perhaps as much as the players, though, it’s time to credit the genius of coach Mike Babcock, the only Triple Gold Club coach and a man whose staff clearly prepared a brilliant game plan for his players.

“I think we scored one goal but we generated a lot controlled the game for a big part,” Bouwmeester said. “We did a good job, the forwards did a great job tonight on the puck, I think that stopped a lot of their offence before it even started.”

The referees were both NHLers. Shifts were sometimes only 10 or 15 seconds long. Pucks went out of play and whistles were coming fast and furious, and you couldn’t cut the tension with a chainsaw.

But for one fleeting moment, Jay Bouwmeester got the puck at the point and made a sensational pass through the slot where Jamie Benn redirected it into the top corner of the U.S. goal at 1:41 of the second period.

“The puck kind of came out, and there were guys going to the net,” Bouwmeester described. “You’re not going to beat their goalie with a lot of clean shots. It was lucky Benny got a stick on it.”

That was all Canada needed on the scoreboard, but the team played a sensational defensive game, shutting down Phil Kessel and Co. by keeping the puck in the U.S. half of the ice as much as possible.

“We stuck to our system right from the start. We skated well and didn’t give up a whole lot. When we did, Carey was there to make some big saves. It feels pretty good.”

Although his line didn’t score, Crosby and wingers Chris Kunitz and Patrice Bergeron were dangerous all night, creating many fine chances. The touch isn’t there yet, which remains a concern, but on this night it was the line’s improvement that mattered most.

For the Americans, it was another frustrating game against their rivals, having lost in the Gold medal game in 2010 and 2002. The U.S. still has the unique record of having won its only Gold medals on home ice (1980 and 1960).

For Canada, it hopes to win back-to-back for the first time since the Soviets in 1984 and 1988. The Canadians also haven’t won Olympic gold in Europe since 1952, another historical fact the team would like to alter when it faces Sweden on Sunday afternoon.

It will be the first Gold medal meeting between the nations at the Olympics since 1994 when Tre Kronor won on Peter Forsberg’s memorable shootout goal.

The first period was scoreless, but Canada was firing on all cylinders, generating many fine scoring chances (to the good) and misfiring time and again from close range (bad). Quick was excellent in goal for the Americans, but Canada’s forechecking and pressure were impressive.

The Crosby line finally worked as everyone had expected. All three had great chances to score, and as a team they fired 16 shots at Quick in the opening 20 minutes.

The Kessel line with James vn Riemsdyk and Joe Pavelski, though, was shut down, kept to the perimiter, forced to come back deep in their own end, unable to generate speed through centre ice.

“I think they just had the puck a little bit more, especially in our zone,” Pavelski acknowledged. “We just didn’t sustain enough. Its tough to lose 1-0. It’s close. You know you’re right there. We had enough power plays to catch them.”

Price was less busy, but he did make one fine save on John Carlson after a giveaway by Jonathan Toews behind the U.S. net. Canada was dominant and unlucky to be in a scoreless tie, but from the American perspective, the team withstood Canada’s firepower and was still in a 0-0 game.

Early in the second, though, Canada connected on Benn’s goal, and that lifted a huge weight off the players’ shoulders.

Canada didn’t sit on the lead. Wave after wave swooped into the U.S. end to forecheck and keep the puck deep. Price was letter perfect in the period, a calm and poised presence which was just what Canada needed.

The best chance for the U.S. in the second came when Paul Stastny jammed a puck through Price’s pads, but it rolled wide of the far post.

The third was tense, but Canada continued to forecheck until the final five minutes when it played a dangerous game of protecting the lead. However, the team was so aggressive in defence that the U.S. never came close to tying the game, even with Quick on the bench in the final minute.

“At the moment, there’s a great conglomeration of both (anger and disappointment),” American forward David Backes said. “We had an awesome opportunity. I don’t think we laid it all on the line the way we needed to in order to win. A 1-0 game in a semi-final against your rival country, it’s a sour taste for sure.”

That taste will get better or worse tomorrow night when the Americans try to re-group and play for Bronze against Finland.