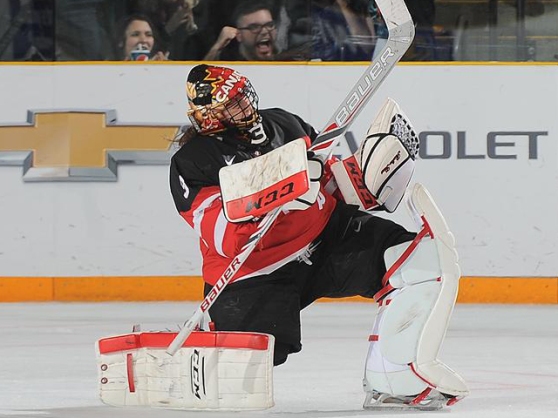 Brianne Jenner scored the only goal of the shootout as Canada defeated the United States 3-2 to win the 2014 Four Nations Cup.

A late addition to the roster, Jenner rifled a backhand high stick side on Canada’s second shot of the shootout to give her country its 14th title Gold medal at the event.

Geneviève Lacasse made 33 saves in the win.

More than 5,800 fans filled the Interior Savings Centre Saturday night to see the latest chapter in the sport’s best rivalry.

A mad scramble in front of the Canadian crease in the opening 30 seconds set the tone early. Physical play by both sides led to three penalties being called in the opening six minutes.

The ice was still wet for the start of the second period when Decker equalized for the Americans. Her wrist shot from the face-off dot beat Lacasse low far side.

Knight gave the Americans the lead just over eight minutes later when she got sprung on a breakaway from just outside the blue line.

A late goal gave the momentum back to Canada heading into the second intermission. Spooner sent a pass from the boards out to the face-off circle, where Wakefield spun and scored her second of the night.

Canada nearly won it in regulation, when Spooner put a loose puck in from the low slot. A quick whistle brought the goal back.

And Alex Carpenter twice came close to ending it in overtime for the United States. Three minutes in her backhand was saved by the post; seven minutes later Lacasse stoned the American captain on a partial breakaway.