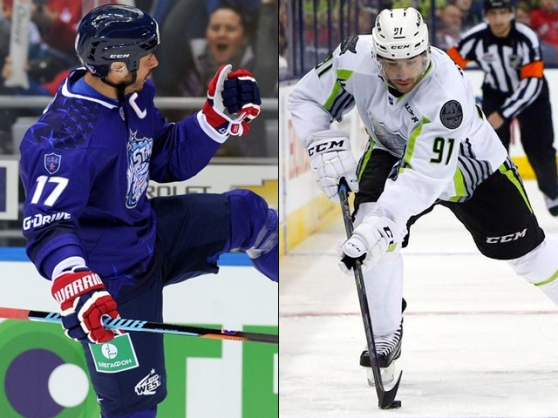 Separated by nearly 10,000 kilometres, the best hockey players in the world gathered both in Sochi, Russia and Columbus, Ohio to showcase the game’s top stars in the All-Star Games for the KHL and NHL, respectively, with International Hockey Lineal Champions abound showing off their skills.

At the seventh annual KHL All-Star Game at the Bolshoy Ice Dome, Sergei Mozyakin (🇷🇺) and Ilya Kovalchuk (🇷🇺) went head to head to lead their teams to a combined 34 goals in an 18-16 Team East win, a mind-boggling stat even for a typical All-Star Game. Mozyakin finished the night with six goals to Kovalchuk’s four, while six other players scored a pair each. In total, 18 goals in the game were scored by IHLC holders, including Mozyakin, Kovalchuk, and two-goal scorers Denis Parshin (🇷🇺) and Sergei Plotnikov (🇷🇺).

Later in the day, at the 60th edition of the NHL All-Star Game at the Nationwide Arena, John Tavares (🇨🇦) skated away with the lead in goals with four, tying himself with five others for the all-time All-Star Game record, leading Team Toews to a 17-12 win over Team Foligno. Jakub Voráček (🇨🇿) netted a hat trick, with another six players scoring a pair each. In total, 15 of the 29 total goals were scored by IHLC holders, including Tavares, as well as two-goal scorers Steven Stamkos (🇨🇦) and Rick Nash (🇨🇦).

Regular season play will now resume on both sides of the globes, in the lead-up to the chases for both the Stanley and Gagarin Cups, as well as preparation for the 2015 IIHF World Championships this May.