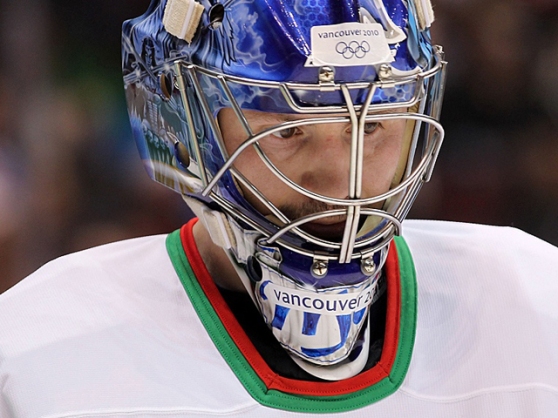 Only a week after highlighting the “Miracle At Salt Lake” victory, the goaltender that backstopped Belarus for that and another 15 international tournaments (Olympics and World Championships, only bested for a goaltender by the legendary Vladislav Tretyak), Andrei Mezin, today announced his retirement at the age of 40.

Mezin, who began his career bouncing between the North American minor leagues in the IHL, AHL and UHL, failing to make an NHL squad, Mezin found his stride in Europe, playing for the Nürnberg Ice Tigers and Berlin Capitals of the German League, HC České Budějovice in the Czech League, and playing for a number of squads in the Russian Superleague/KHL, including AK Bars Kazan, SKA Saint Petersburg, Salafat Yulaev Ufa, Metallurg Magnitogorsk, Dinamo Minsk, Traktor Chelyabinsk and Avangard Omsk, winning the 2008 European Champions Cup with Metallurg, and playing in the 2010 KHL All Star Game while in Minsk.

But it will be playing for the Bisons that defines Mezin’s career, playing in three Olympics (1998, 2002 and 2010) and thirteen World Championships (1998-2001, 2003, 2005-07, 2009-12 and 2014), one short of Tretyak’s all-time total for goaltenders, and only behind Tretyak and Czech keeper Jiří Holeček in total World Championship games played. While Mezin never medalled in his lengthy career, he was twice named to the tournament all-star team (2006 and 2009), and was famously in goal for Belarus’ stunning Quarterfinal upset over Sweden at the 2002 Olympics, unexpectedly landing Belarus in the bronze medal game against Russia.

As for the IHLC, Mezin first won the title in Belarus’ first ever title victory in 2000, winning again at the aforementioned “Miracle” in 2002, and one last time in 2011. We wish Andrei and his family the very best for his retirement and the things to come!