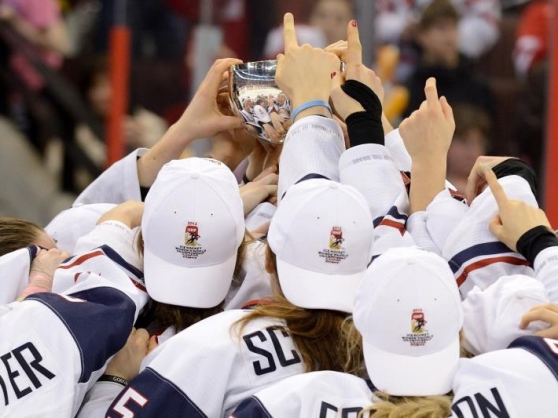 Five months after the last women’s hockey showdown at the 2014 Four Nations Cup, the top eight teams in international women’s hockey will reconvene in Malmö, Sweden, for the 2015 IIHF World Women’s Championship, two years since the last Worlds that ended in a stunning American victory in Canada’s capital.

Despite the new tournament format, in place since 2012, that allows for closer-ranked teams to play in separate groups (thus ending many of the normally lopsided scoresheets in the tournament), the safe bet is to assume that Canada and incumbent champions Team USA will meet for the 16th consecutive Gold Medal, with Canada having won ten since the first tournament in 1990. However, both sides will be starting much younger rosters than in years past, with veteran captains for both Canada (Hayley Wickenheiser, injured) and the United States (Julie Chu, cut) absent from Sweden.

While the Americans have more goaltending experience with the likes of Molly Schaus and Jessie Vetter (as Canadian starter Shannon Szabados is unavailable for Malmö), Canada’s offensive weapons like Jennifer Wakefield, Natalie Spooner and Olympic hero Marie-Philip Poulin will be back. Which team wins is frankly a toss-up, but history shows that in the past three Worlds where these teams played each other twice (2009, 2012 and 2013), the team who loses the Preliminary Round tilt has gone on to win the Gold Medal final. Also, interestingly enough, the last World Championship (2005) and Four Nations Cup (2011) hosted in Sweden were both won by the Americans in shootouts.

One other interesting facet is the situation of rising squads, particularly Finland and Switzerland, and how they will impact the tournament. Both squads have spectacular talent in net from Noora Räty and Florence Schelling, respectively, and either could prove to play the spoiler here (UPDATE: Räty announced she will miss the tournament on 24 Mar. due to health reasons). Both teams put on solid efforts in close IHLC battles at last year’s Olympics in Sochi (Finland against Team USA, Switzerland against Canada in the Semifinals), and are inching ever closer to breaking the streak of Canada-USA Gold Medal Games.

Whatever the tournament holds, it will be interesting to see how neutral Swedish ground impacts the big guns of the game, as this is the first tournament since 2011 not hosted in North America, where both Canada and the U.S. won Gold on rival ice in consecutive years. Who leaves Malmö with Gold, and with the IHLC as well, remains to be seen, but it will surely be an exciting week of hockey!