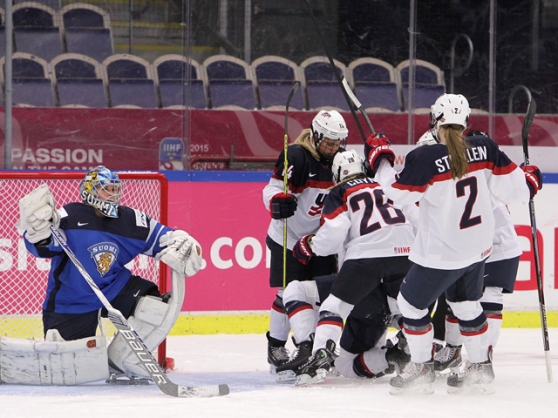 As the old Nintendo ad said: “Now you’re playing with power.” Hilary Knight had two goals and an assist to pace the U.S. to a 4-1 win over Finland on Sunday.

Knight, widely regarded as the world’s top power forward, now has three goals at this tournament, and 21 in her Women’s Worlds career.

Decker spoke of the key to success with her linemates: “Coyner and Knighter and I, we’re all just moving the puck really well, and finding the spaces where we can just make passes easier.”

This score could easily have been more lopsided. It was a truly dominating performance for the U.S., whose odds of defending their 2013 world title look pretty good at this point.

Shots on goal were 53-12 for the Americans — against the nation that has appeared in every bronze medal game since this tournament’s 1990 inception.

“They have a really good and fast team,” said Finnish captain Jenni Hiirikoski. “You can’t do any mistakes.”

Major roster changes colored this Group A matchup, and youth had its day.

Star Finnish forward Michelle Karvinen, who tied for the 2014 Olympic scoring lead with seven points, sat out with the flu. The 19-year-old Noora Tulus took her place on the top line with Tapani and Riikka Välilä (née Nieminen).

U.S. goaltender Alex Rigsby appeared in her first career World Women’s Championship game. The rookie was briefly spelled off by Molly Schaus late in the first period, but played the rest of the way. At the other end, Finland’s Meeri Räisänen got her second straight start, and she had her hands full.

Tapani gave Finland the lead halfway through the first period, working a sweet give-and-go with Välilä and catching Rigsby sliding as she popped it high to the glove. It was only Finland’s second shot of the evening.

The U.S. struck back just 28 seconds later. Off a draw in the Finnish zone, Knight grabbed the puck, powered to the net with a neat dipsy-doodle, and fooled Räisänen.

U.S. coach Ken Klee liked the way his team responded: “It’s great. Obviously they’re veterans, world-class players. There was no panic in our bench. (The Finns) made a nice play, and we can tip our hat and get right back to it.”

“That was a goal that shouldn’t have happened,” Hiirikoski said about the first U.S. marker. “There were a couple of mistakes today.”

Tapani took a late first-period tripping penalty that proved costly. At 18:12, Knight banged in a loose puck at the side of the net to give the U.S. a 2-1 lead.

The Knight line used their speed and power again to make it 3-1 at 1:16. Räisänen made the initial save on Brianna Decker, but couldn’t control the rebound, and Coyne buzzed in to sweep it past her. It was a crushing blow.

With about seven minutes left in the period, the Knight line completely bottled up the Finns in their own zone, moving the puck around as if it were a power play – even though it was 5-on-5. That image told the tale of this night, and the U.S. had a whopping 21-2 edge in shots in the middle frame alone.

Klee said: “Once we got through the first period, we started finding our legs and our puck possession game, playing the type of style we want to play, which is, “If we can possess the puck, it’s good for us.'”

At 16:18 of the second, Brandt pulled a nice drag-and-drop move on rearguard Anna Kilponen before whipping the puck high past Räisänen’s glove for the fourth American goal. Keller earned her first career World Women’s Championship point, assisting on the shorthanded marker.

In the scoreless third period, the Finns mustered seven shots, but the U.S. wasn’t relinquishing its advantage.

The Americans take on Russia in Tuesday’s early game at the Malmö Isstadion, followed by Finland versus Canada.

Klee commented on the Russians: “My assistant coaches have pre-scouted them. They said they’ve got some really skilled players. For me, coming from the NHL, I certainly saw enough skilled Russians. That doesn’t surprise me. It’ll be interesting.”