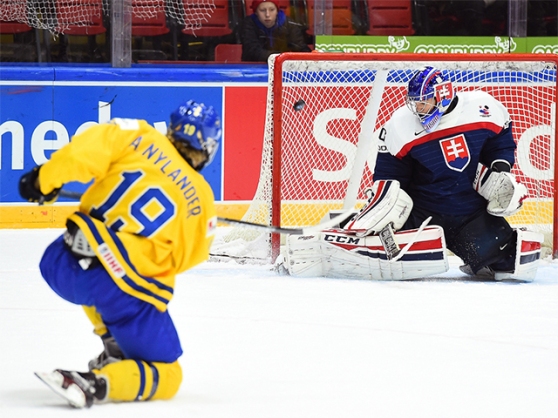 Four Swedes – Kempe, Jens Lööke, Axel Holmström, and Jakob Forsbacka-Karlsson – had two-point games and Linus Söderström made 17 saves en route to his second shutout in the tournament. No other goalie has recorded a shutout.

“Feels good to be through to the semi-finals, and I thought we played a really solid game,” Holmström said.

“We went out there to play our hockey for 60 minutes and except for a short period in the second period, I think we did just that,” he added.

Slovakia’s goaltender Adam Húska made over 50 saves in the game, and was, despite the score, one of Slovakia’s best players in the game.

While Sweden lost the Bronze medal game to Slovakia last year, 4-2, they had won the eight previous meets, dating all the way back to 2004. Of course, Slovakia wanted to repeat last year’s upset, but this time Sweden wouldn’t have any of that and they took a convincing 6-0 win.

“We knew they have a good team, and we wanted to give it our best shot and win the game. Unfortunately, that didn’t happen,” said Slovakia’s Matúš Sukeľ.

Sweden’s domination was total especially in the first period in which they outshot Slovakia 17-5, and carried the play from the first minute to last, despite taking three penalties.

Joel Ek Eriksson gave the Swedes the all-important first lead at 5:10 when he wired a wrist shot top-shelf after Jakob Forsbacka-Karlsson had won an offensive zone faceoff cleanly. Ek Eriksson had a clear line to top-shelf, and Adam Húska in Slovakia’s goal didn’t stand a chance.

“We did what we had aimed to do and took control of the game early on by being physical,” said Anton Karlsson.

Sweden scored their tournament second best seventh power-play goal – Finland had eight before their quarter-final against Canada – five minutes later. Adrian Kempe took a shot from the point, Axel Holmström and Oskar Lindblom were in front of the net, and Lindblom slammed in the rebound at 11:35.

Halfway through the middle period, Christoffer Ehn carried the puck into the Slovak zone and tried to deke his way around a defenceman. The puck bounced to Jens Lööke instead, he skated around another defenceman and sent a backhand pass to the backdoor where Ehn had an easy job to tap it on for 3-0 at 10:07 into the period.

3:43 into the third period, Kempe showed off his wrist shot once more to make it 4-0.

Sweden outshot Slovakia 35-11 through two periods. Holmström carried the puck into the Slovak zone and passed it to Kempe, who toe-dragged a Slovak defenceman and sent a laser top-shelf, on Húska’s blocker side, much like he scored the goal in Sweden’s game against Denmark in the preliminary round.

Sweden made it 5-0 while shorthanded, with the hockey gods smiling upon Lööke whose shot missed the net originally, but bounced back and hit Húska’s left pad, hit the left post, and rolled in. Forsbacka-Karlsson’s assist was his second point in the game.

With 3:03 remaining in the game, Alexander Nylander also got on the scoresheet. Dmytro Timashov had the puck in the corner and he had all the time in the world to wait for Nylander to get from the bench to the top of the circle. Timashov sent a long pass, Nylander fired it top-shelf to seal the final score, 6-0.

Slovakia’s tournament is now over.

“We played well against tough opponents, and we won our most important game, against Belarus, which got us to this quarter-final. We wanted to do some damage here, but unfortunately, came up short,” Sukel concluded.