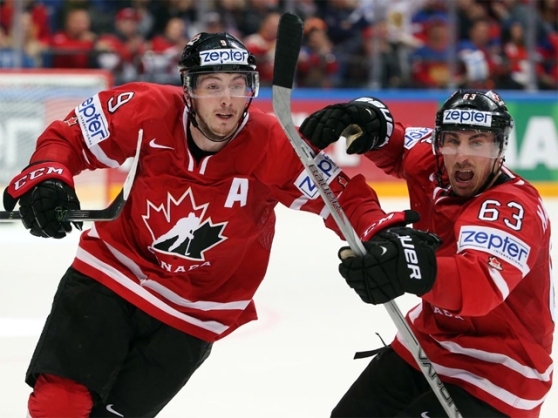 Connor McDavid’s first goal of the tournament, at 11:24 of the opening period, held up as the gold-medal goal in Canada’s 2-0 win over Finland.

“We’re going to stay together as a team!” Mark Schiefele roared. “We have all our families here and it’ll be a fun night for all of us. We came together as a family here these past few weeks, and we’re definitely going to celebrate together.”

Canada has now defended its title from last year successfully, and in doing so replicated its win the last time the World Championship was held in Moscow in 2007 when the nation defeated Finland.

Matt Duchene had the other goal, an empty-netter with 0.9 seconds remaining.

Cam Talbot was perfect in the Canadian goal, although he had to stop only 16 shots for the shutout victory.

With the win, two Canadians made history. Captain Corey Perry becomes the 27th member of the Triple Gold Club and McDavid becomes the youngest player in history to win the U18 Gold, U20 Gold, and World Championship Gold.

“I think you just saw how well we managed the puck,” McDavid noted. “We didn’t really feed into their transition and didn’t really give them any chance to get anything going off the rush or in zone.”

“In these tournaments where you don’t have a chance to play very long together,” Morgan Rielly said. “You have to learn from your mistakes and get better every game. You can only afford to lose one or maybe two games. You do that, you learn from your mistakes, you get better, and that’s what we were able to do tonight. Credit goes to the coaching staff. We knew exactly what they were going to do. We knew how we had to play and we went out there and did it and won.”

“The first game we played against Finland we felt pretty good about ourselves in the first period but tonight we did it for sixty minutes,” said Derick Brassard, Canada’s leading scorer with eleven points. “Tonight we were all over them. Finland is a really smart them that waits for you to make mistakes and go the other way to score. Tonight we didn’t give them anything. They really pushed us to be a better team.”

It was a tactical and strategic game that lacked the end-to-end action both teams displayed throughout the tournament, but Canada was intent on doing the things it failed to do in the round robin when the Finns won in convincing 4-0 fashion.

“We knew what we were up against,” Mark Scheifele said. “Finland’s a very good team. They have good goaltending, good defence, and great forwards. They shut it down pretty good and they don’t give us a whole lot of opportunity in the offensive zone. We knew we had to take advantage of what we could, and we did a great job of that today.”

“They played one of their best games of the tournament, and we weren’t at our best,” Jussi Jokinen agreed. “It’s tough to say why, but they deserved to win tonight. I’ve not often seen Canada play like that. It was a really smart game plan from them.”

Canada controlled much of the first period and came away with the only goal, but just barely. The play started and ended with 19-year-old McDavid. He coiled in his own zone and then spun up ice at a terrific pace, dropping the puck to Matt Duchene just inside the blue line.

Duchene’s shot was blocked but McDavid, at the top of the crease, showed incredible hand speed by controlling the puck and lifting it into the top of the net at 11:24. It was his first goal of the tournament, but it was a timely beauty and happened so fast it could only really be appreciated in slow motion.

Finland had a couple of decent scoring chances to tie the game, none better than when Atte Ohtamaa made a sensational pass from the boards to Patrik Laine, all alone in front. Laine made his move, but Talbot was there with the left pad to keep the puck out.

Canada played a smart second period, keeping the Finns to the outside, not leaving itself vulnerable to torpedo passes, and maintaining puck control for long stretches in the Finnish end.

The only slip-up was a slashing penalty to Mark Scheifele late in the period, but at the split second when it looked the Finns would tie the game, Talbot came up with a huge save.

Jarno Koskiranta was alone in front with the puck but took a fraction of a second too long to shoot, giving Talbot time to move his right pad across the crease and prevent a sure goal.

Canada was relentless in the third, playing defence 200′ from its own goal to perfection and keeping tournament MVP Laine and his teammates at bay.

The game ended in bizarre fashion. After Duchene’s goal, the players poured onto the ice to celebrate with Talbot, but with 0.9 seconds remaining they had to clean up, drop the puck, and celebrate again!

“I don’t think anyone was really thinking at the end,” McDavid enthused. “We saw the puck go in, the clock was running down, and we just down to the ice. So we got to celebrate twice in the end.”