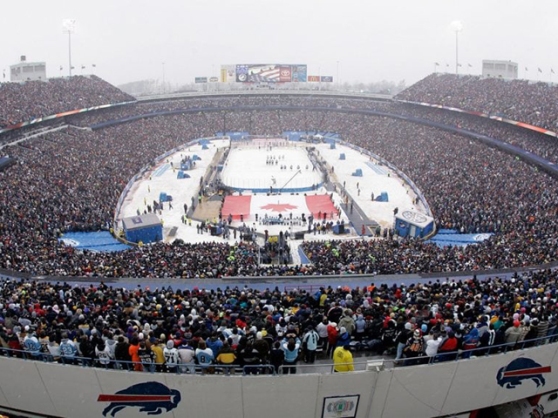 The schedule for the 2017 IIHF World Junior Championship in Buffalo, New York is highlighted by the first ever outdoor game in IIHF competition, a tilt between defending champs Team USA and their cross-border rivals, Canada, on 29 December, at New Era Field in nearby Orchard Park.

Canada and Team USA round out Group A, playing mainly out of KeyBank Center (home of the Buffalo Sabres), with Slovakia, Denmark, and a surprising Finnish squad that barely avoided relegation in 2017. The only exception will be the aforementioned outdoor game, played at the home of the Buffalo Bills, which can seat well over 70,000 people, and will surely be packed with fans from both sides, with Buffalo being a short drive from the Canadian border. Group B will split play between KeyBank Center and nearby HarborCenter, and features last year’s Semifinalists Russia and Sweden, along with Czechia, Switzerland, and newly-promoted Belarus.

Team USA will surely be looking to successfully defend their title to win their fifth Championship, their first back-to-back title, and first on home ice. But Canada and Russia will both be looking to retake their spot atop the junior hockey world, while perennial contenders Sweden and Czechia will be lurking, and a determined Finnish squad will look to redeem themselves after last year’s shockingly pitiful performance.

The IHLC champion for the tournament will be confirmed at the very latest by the Four Nations Cup in November, as we will know if the title made it past next month’s National Junior Evaluation Camp to a European squad, or if Canada or the defending champs will keep the title until Boxing Day. It is sure to be a fun ride en route to Buffalo!