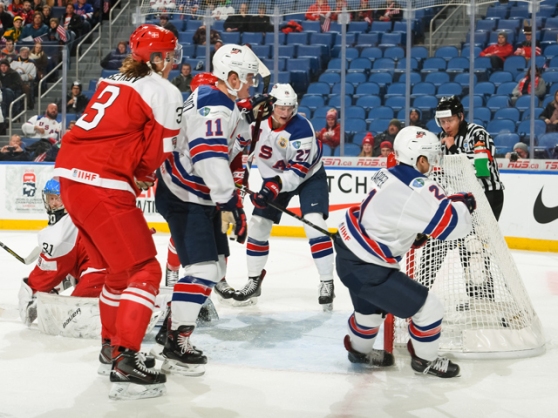 The defending champion U.S. got five first-period goals and never looked back in a 9-0 demolition of Denmark to start the 2018 World Juniors on Tuesday.

“We came out ready to go,” said Mittelstadt. “We got a nice goal from Jonesy right away to start it off. That got us rolling. In a tournament like this, it’s big to get the first one.”

Goalie Joseph Woll, who backed up Tyler Parsons for last year’s Gold medal team, recorded his first career World Junior shutout and third win. Danish starter Kasper Krog, whose .919 save percentage was third-best among 2017 goalies, will have a hard time cleaning up his stats in Buffalo. He only allowed nine goals in total last year.

The Danes are seeking their fourth consecutive quarter-final berth, but set the wrong tone at KeyBank Center. This was their third all-time meeting with the Americans. Although not favoured to prevail, they would have preferred to at least keep the score closer to their previous encounter (a 4-1 U.S. win on 31 December 2015) than their inaugural flop (an 11-3 U.S. win on 26 December 2011).

Denmark will try to rebound versus Finland on Thursday, while the Americans take on Slovakia that day.

“Obviously there’s a target on our back,” said Bellows. “There always is with us being USA Hockey. We’re rising up right now. We have to come to every game prepared like it’s our last.”

Featuring seven returning players, the U.S. ruthlessly exploited the holes in Denmark’s coverage and was full value for the win.

It took just 2:27 for the host nation to draw first blood, as Jones cut to the slot past Danish defenders and slid the puck home. At 5:04, Bellows made it 2-0 with the man advantage, squeezing a heavy wrister from the right faceoff circle past Krog.

Coach Bob Motzko’s crew capitalized on the power play again at 8:26, as Mittelstadt, like Jones before him, celebrated his first career World Junior goal. The partisan crowd roared as Mittelstadt, a University of Minnesota star, was drafted by the Buffalo Sabres (first round, eighth overall) this year.

“I have really high expectations of myself and I expect myself to play to the best of my ability, whether it’s here or not,” said Mittelstadt. “Coming to Buffalo is a little bit of a cherry on top.”

The American pressure and precision was overwhelming. In Gretzky-like fashion, Brady Tkachuk centered the puck from behind the net to Yamamoto, who made no mistake for a 4-0 lead at 11:35.

Denmark got its first man advantage when Will Lockwood was sent off for interference after steamrolling Valdemar Ahlberg in the corner, but it was fruitless. With 1:12 left in the first period, Mittelstadt cruised to the side of the net and casually roofed Patrick Harper’s feed past Krog.

Although Krog had surrendered five goals on 13 shots, Danish coach Olaf Eller (the father of Lars Eller of the Washington Capitals) kept his starter in for the second period. After being hooked on a breakaway, Bellows made it 6-0 on a penalty shot at 4:08, curling in from the left side to put a backhand through Krog’s legs.

At 19:31, Harper added the seventh goal on a high wrist shot that fooled Krog through traffic.

Woll said of his quiet night: “In this kind of game, you just have to keep your focus. It’s a good test mentally and physically to stay warm and keep your body alert.”

Backup goalie Emil Gransøe finally replaced Krog in the third period, but it made no difference as Peeke and Samberg rounded out the scoring.