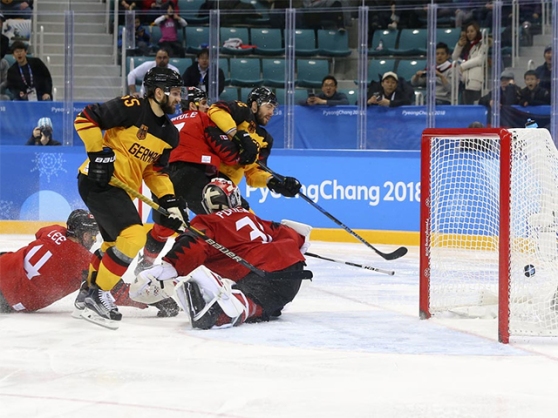 Germany has defeated Canada for the first time in Olympic hockey history after suffering 15 straight losses dating back to 1932 (including East and West).

The reward for this historic victory is a more historic opportunity to play the Olympic Athletes from Russia for the Gold medal for the first time.

Canada outshot the Germans 31-15, including 15-1 in the third, but after building a 4-1 lead through 40 minutes they survived a relentless Canadian attack to win the game. Canada will now play the Czechs tomorrow night for the Bronze medal.

“I’m just very proud of how those guys performed,” said German forward Marcel Goc. “The effort is there from every guy, every shift. They go out and pay the price, sacrifice the body, and do whatever it takes to play a solid team game. This is awesome. I don’t know how to describe it for German hockey. This is unreal. We’re in the finals in the Olympic Games playing against Russia, against the superstars from the KHL. We’ll rest up tomorrow and see what happens on Sunday.”

Penalties factored into tonight’s score in a significant way. Canada scored twice in seven advantages and the Germans also scored twice, in four chances. Both teams had moments of undisciplined play.

“It’s disappointing,” said Canada’s Mason Raymond. “That’s hockey. They played a good game the first half. We didn’t play the game we were wanting. They outworked us in the first half and discipline and penalties definitely hurt us. We knew they were a good team. They got to the semis for a reason. You’ve got to give credit. They played well, but I don’t think we orchestrated what we were hoping to do well enough.”

“We talked,” said Andrew Ebbett of his team’s preparation. “We had a good mindset coming in the last day and a half. Everyone was focused and prepared. The coaches did a good job. I don’t know. We came out flat there in the first. It doesn’t matter who you’re playing in a tournament like this, it’s the Olympic Games.”

Coach Willie Desjardins pulled goalie Kevin Poulin with 2:22 left in the third, but Canada couldn’t get the tying goal before the final buzzer. After starting these Olympics with two losses, the Germans have now won four games in a row, all by one goal.

“We played against Switzerland, and everybody thought that was it,” Marcus Kink started. “Then, we played against Sweden, the World Champions right now, and everybody said ‘OK, the journey’s over’. People had already booked our flights back home, and we beat Sweden and now we’re still here. Then we played Canada, and people were like ‘OK, you guys can’t beat Canada,’ but we’re still here. It’s amazing!”

“It’s funny,” Kink continued. “We started group chat and the chat was named Mission: Gold. The guys were laughing when I opened up the chat and invited all the guys. Everybody was like ha ha. But then our belief grew every day and now we’re in the finals.”

This also marks the first time in 84 years of competition between the two teams that Germany has scored four goals against Canada. And they needed that last one more than any other.

The Germans took advantage of several defensive breakdowns by the Canadians, and in their own end they created a veritable wall around goaltender Danny aus den Birken, blocking shots, chipping the puck out and letting Canada chase it, and taking time away from their opponents.

Canada had some good pressure early on but didn’t generate any top-rate scoring chances. The game changed, though, when Felix Schütz hit Maxim Noreau into the boards and received only a minor.

Soon after, Canada unwisely incurred two penalties at the same time, and the Germans had a five-on-three power play for 49 seconds. Brooks Macek, born in Winnipeg, Canada, fired a quick wrist shot past the outstretched blocker of Kevin Poulin at 14:43 during that advantage.

“When we scored the first goal, we thought we could win,” Kink said. “Canada was a bit shocked and that was our game plan. We played good defence, frustrated the other team and we had a chance on the power play and scored. We know we can make a really strong defence, and that’s what we did. We got chances and capitalized on them.”

Canada came out strong in the second, but it was the Germans who scored next. This time Patrick Hager fired a great pass to Matthias Plachta, and his quick shot found the twine at 3:21.

Just to prove this 2-0 lead was no fluke, the Germans padded their lead less than four minutes later on a great play. David Wolf fired a stretch pass to Marcel Goc. Goc faked a shot to draw a defenceman to him, then feathered a pass to Frank Mauer, who made no mistake.

The Canadians got one goal back on a power play of their own thanks to a Gilbert Brulé shot, but the Germans simply would not give in. They converted on another man advantage at 12:31, this time a point shot going off the knee of Hager and in.

Then the penalties started anew. Brulé drilled David Wolf with an elbow to the head in centre ice, drawing a major penalty and game misconduct and putting Canada further into a hole. The Canadians killed it off but soon after drew another minor.

Canada got the start it wanted in the third, starting on a faceoff win in its own end. Moving the puck up quickly, Christian Thomas fed Mat Robinson with a pass and he made a nice deke on aus den Birken before lifting the puck in at 2:42.

Relentless, Germany drew a penalty shot just 39 seconds later when Cody Goloubef tripped Dominik Kahun on a breakaway, but Poulin stoned him to keep the game within reach.

That reach got a bit closer on a power play. Derek Roy fired a pass in front that went off a skate at 9:42, making it 4-3, and now the Germans were desperate to stop the Canadian momentum.

But stop it they did, and now they’re going for gold!

“I can’t believe what happened out there,” said Patirck Reimer. “We always had that dream about playing for a medal, but how big were the chances? I feel like we’re still dreaming. Now we’re playing for Gold at the Olympics which is unreal.”