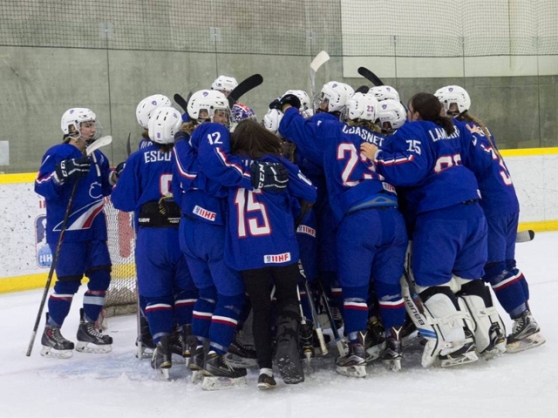 France’s women’s hockey team has made history in the Alps commune of Vaujany, as they became the tenth and final team to clinch a spot at the 2019 IIHF Women’s World Championship, becoming the first team to join the Top Division since the tournament expanded to ten teams in 2017.

After the second day of competition, the tournament appeared to be up for grabs, as each team had one win and one loss. However, France began to pull away, entering the final day of competition with only Norway able to overtake them on head-to-head points. However, with Norway’s 3-0 to Austria early in the day, France clinched before their final tilt against Slovakia, which they won anyway with authority by a 7-1 score, with Lore Baudrit and Chloé Aurard each finishing with two goals apiece. Defender Gwendoline Gendarme was named best Defender of the tournament, with Norweigan goalie Ena Nystrøm and Hungarian forward Fanni Gasparics taking home the other Directorate Awards.

France has now clinched the tenth and final spot in next year’s World Championships in Finland, the first iteration of the tournament to feature ten teams. When the new format was announced in 2017, both Czechia and Japan were made eligible to clinch the eighth and ninth spots, leaving the tenth and final spot up for a team that either had not played at the top for some time (Slovakia, Norway or Denmark), or a brand new team altogether (France, Hungary or Austria). With the win for Les Bleus, France will now at least tie for their top finish in history, as they finished 10th (second in Division IA) in 2016, narrowly missing out on the 2017 tournament. And as recent tournaments have shown, the parity between women’s teams, particularly European women’s teams, has been getting tighter year after year, so France could certainly surprise next year.

Our congratulations go out to Les Bleus on this tremendous accomplishment for French women’s hockey!