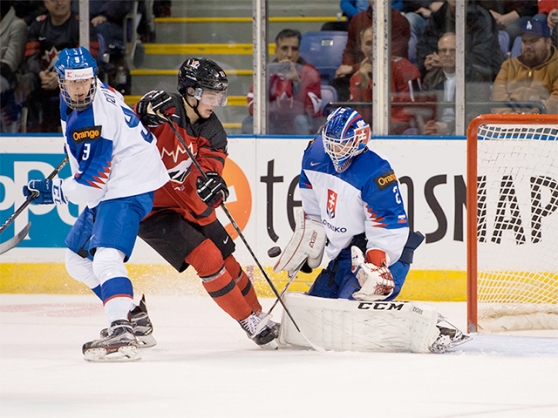 Cody Glass had a goal and two assists for the second game in a row, and Canada’s National Junior Team rode a big first period to a 6-1 win over Slovakia on Friday night ahead of the 2019 IIHF World Junior Championship.

The Canadians scored four times in nine minutes and 43 seconds to take control early and close out a perfect Victoria portion of their pre-tournament schedule; they downed Switzerland 5-3 on Wednesday.

Maxime Comtois, who had a pair of goals in the win over the Swiss, got the offence going against Slovakia, taking a feed from Glass and snapping a quick shot over the glove of Slovak goaltender Samuel Hlavaj just 6:55 in.

Jack Studnicka banged in a power-play goal for the second time in as many games to make it 2-0, and Nick Suzuki was the benefactor of hard work down low by Jaret Anderson-Dolan on the 3-0 goal.

Shane Bowers batted a Joe Veleno rebound out of midair and past Hlavaj to send Canada to the intermission up four.

Glass had the lone goal of the second period, taking a pretty pass from Evan Bouchard and beating a diving Hlavaj for a power-play marker.

Ty Smith added the final Canadian goal early in the third period; his seeing-eye shot from the point made its way through traffic for a 6-0 lead.

Patrik Hrehorcak spoiled the shutout for Ian Scott with less than five minutes to go, racing in off the right wing and going over the short-side shoulder of the Canadian netminder.

Canada finished with a 45-23 advantage in shots on goal. It finishes pre-tournament action Sunday against Finland in Vancouver before opening the 2019 IIHF World Junior Championship on Boxing Day when it takes on Denmark.