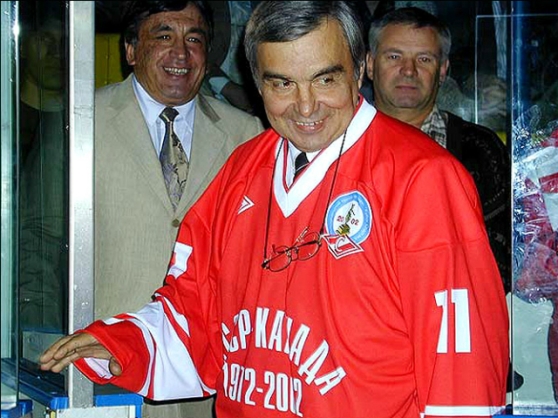 Soviet star player Yevgeni Zimin, a multiple-Gold medal winner at both the World Championships and Olympic Games, passed away today of a heart attack at the age of 71.

Zimin was a lifetime member of Spartak Moscow, joining the club in 1965 and spending a decade with the team, winning club championships in 1967 and 1969. His number was retired by the team in 1998, and he spent time as a coach for Spartak and the Soviet junior team before joining the Philadelphia Flyers as a scout following the fall of the Iron Curtain.

Internationally, Zimin held a perfect record at IIHF tournaments, winning Gold at both the 1968 and 1972 Olympics, along with the 1969 and 1971 World Championships. Zimin was also a member of the 1972 Summit Series team, scoring twice in the Game One shocking upset in Montréal before withdrawing from the series due to injury after Game Two.

Due to Canada’s international boycott of the IIHF starting in 1970, Zimin only won the IHLC once in his career, in the aforementioned Summit Series opener. Our condolences go out to the Zimin family, as well as the extended hockey community in Russia, on the passing of this legendary star.