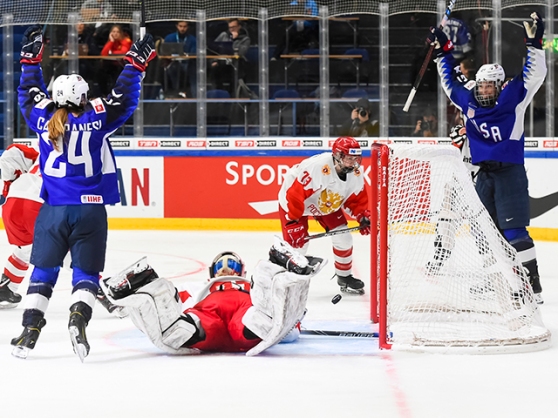 Knight, the ultimate power forward in this sport, leads the tournament with seven goals and 11 points.

It is the first Women’s Worlds final that won’t feature both North American superpowers. The only other comparable case is Sweden upsetting the U.S. in the 2006 Olympic semi-final before losing the gold medal game to Canada.

The current Americans, who are both reigning Olympic champions and four-time defending world champions, will face a different challenge in Finland. It’s an exciting moment for international women’s hockey, which moves one step closer to parity.

With Sweden getting relegated and the Finns playing for gold, the inaugural 10-team Women’s Worlds has truly been a tournament of surprises.

In the semi-final, the U.S., which has won seven of the last eight Women’s Worlds, outshot the Russians 49-11, and the result was never in doubt. The porous Russian defence was overwhelmed.

Russia will attempt to secure its fourth bronze medal (2001, 2013, 2016) in Women’s World history versus Canada. All the others came versus Finland.

The Americans are chipping away at the record books here in Espoo.

Versus the Russians, Knight scored twice, including the first-period winner, and added three assists. The two-time Women’s Worlds MVP now has 43 career goals at this tournament, just one goal back of the all-time leader, retired U.S. legend Cammi Granato. Knight wears #21 in honour of Granato, whose hockey camps she attended with Kendall Coyne Schofield as a youngster.

With her fourth win, U.S. goalie Alex Rigsby tied the record for most wins in one Women’s Worlds, which she shares with five other netminders.

Meanwhile, Kelly Pannek had two goals and an assist, and Megan Bozek and Emily Pfalzer had a goal and an assist apiece. Annie Pankowski and Hayley Scamurra each potted a single. Dani Cameranesi chipped in a pair of assists.

The Americans emphasize focusing on themselves and sticking with their process, and that’s what yielded the opening goal at 11:07.

It was a simple play. Pannek came down the right side and unleashed a quick shot that Russian starter Anna Prugova couldn’t handle. Knight banged in the rebound. The 29-year-old is the only player at these Women’s Worlds who has scored in every game.

At 3:45 of the second period, Pankowski made it 2-0 when she muscled her way from the corner to the slot and scored with a floater through traffic. Knight dipsy-doodled past Russian defender Liana Ganeyeva and then centered it to a pinching Pfalzer for the 3-0 marker at 6:18.

Bozek powered a slapper through the goalie to put the U.S. up 4-0 at 9:59. And just 24 seconds later, Pannek darted into the zone and flung a bad-angle shot that somehow found the twine. That ended Prugova’s night, and Valeria Merkusheva came in.

Knight hammered a power play goal from the top of the right faceoff circle past Merkusheva to make it 6-0 at 18:13.

In the third period, Scamurra scored her first Women’s Worlds goal. It was credited to the 2019 NWHL scoring champ from the Buffalo Beauts, after a video review put time back on the clock, at 6:50. Pannek rounded out the scoring, making it 8-0 at 11:33.

This was the 15th consecutive U.S. win over Russia at this tournament. The Americans have outscored Russian by a total of 138-8.