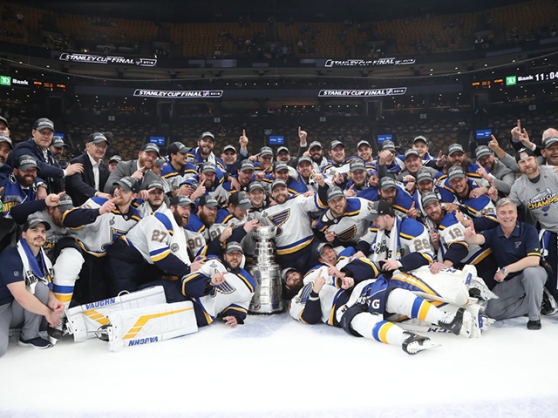 The NHL’s worst team as of the new 2019 calendar year, the St. Louis Blues completed their remarkable and historic season turnaround with a decisive, defensive Game 7 masterpiece to upend the Boston Bruins and win their first Stanley Cup in franchise history.

On the backs of a stellar goaltending performance from rookie Jordan Binnington, paired with the defensive prowess of veterans Alex Pietrangelo and Jay Bouwmeester, and the offensive spark to pounce on a number of Bruins miscues, giving the Blues the 4-1 victory at TD Garden to win on enemy ice. Conn Smythe winner Ryan O’Reilly, Pietrangelo, Brayden Schenn and Zach Sanford were the scorers for St. Louis, who made Bruins goaltender and potential playoff MVP Tuukka Rask look almost human again after a stellar playoffs.

The win marks the Blues’ first championship in team history, ending a 52 year drought, in a season that saw a climb from the NHL basement, a midseason coaching change, and the emergence of a major goalie star in Binnington. The Blues, with the largest contingent of Canadian players in the Finals, see a number of Canadian World and Olympic medallists hoist the Cup, including O’Reilly, Pietrangelo, Colton Parayko and Jay Bouwmeester, who becomes the 29th player in hockey history to join the Triple Gold Club.

Our congratulations go out to the players, management and fans of the St. Louis Blues, with those on the roster that have also held the IHLC highlighted in bold: