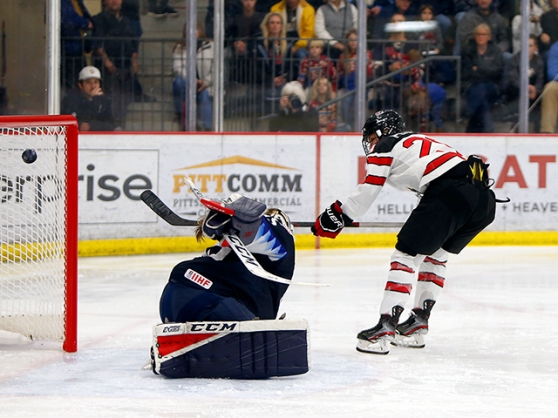 Victoria Bach scored a pair of goals and Marie-Philip Poulin added a goal and an assist, leading Canada’s National Women’s Team to a 4-1 win over the United States on Friday in the first of two games between the long-time rivals.

The game marked the 148th meeting between the North American neighbours since 1990; Canada improved its record to 83-64-1 with the victory.

Bach needed just over six minutes to get Canada going, taking a feed from Poulin on a two-on-one and tucking a backhand around U.S. goaltender Maddie Rooney.

Sarah Fillier doubled the advantage four minutes later, going under the arm of Rooney from the slot, but Hilary Knight batted a tipped puck past Canadian netminder Ann-Renée Desbiens before the end of the opening period.

After outshooting the U.S. 10-5 in the first period, Canada continued its offensive push early in the second and was rewarded with a pair of early goals.

Poulin was first, forcing a turnover at the Canadian blue-line and racing away to roof a backhand on a shorthanded breakaway at 4:12, and Bach got a shot through a maze of bodies and past Rooney just over two minutes later to make it a 4-1 game.

That would be it for scoring as the goaltenders closed the door the rest of the way despite a handful of power plays each way over the final 30 minutes; Desbiens made 22 saves to record the win, while Rooney stopped 19 of 23 in defeat.

The series wraps up Sunday afternoon at the UPMC Lemieux Sports Complex.