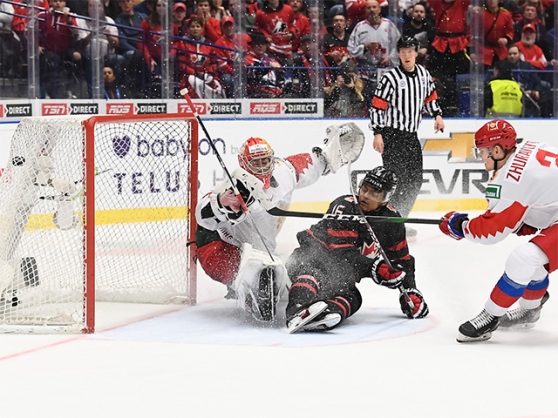 Akil Thomas chased down a loose puck just as he and it got to the top of the goal crease. He managed to backhand the puck in the far side as he fell, breaking a 3-3 tie at 16:02 and giving Canada a dramatic come-from-behind victory in another classic Canada-Russia gold-medal game at the World Juniors.

It was Thomas’s first goal of the tournament and it came in just 5:23 of ice time in the game, second least on the team this historic night.

The goal might have felt like the winner, but soon after Canada incurred another in a long list of penalties, and the penalty killers still had work to do. Making matters worse, Russia coach Valeri Bragin pulled goalie Amir Miftakhov, giving the team a 6-on-4 advantage. Then, the Canadians got lucky, plain and simple. They cleared the puck over the glass, but it hit a camera at the top, thus nullifying a delay of game penalty.

Nevertheless, the Canadians did a masterful job on the PK, and Russia later took two minor penalties to end their hopes.

“I saw my defenceman get the puck and I saw he was going to put it up the wall and McMichael kind of chipped it, and it found an opening,” Thomas described. “The puck was almost going to the goalie. I kind of panicked and brought it to my backhand and put it in. I couldn’t describe how I felt after. I didn’t know what to do. I just wanted the game to be over, but obviously there were still a few minutes left. We took a penalty. We were freaking out on the bench. We were excited. We were nervous. Luckily we got the job done and had a 5-on-3 the last 37 seconds or so.”

“That was a pretty intense game,” enthused Nolan Foote. “There were a lot of penalties both ways, but we got lucky with that one that went off the camera there. Our penalty kill was great all tournament. That was a huge key for us. Obviously, Russia’s got a good power play, so we killed them off tonight pretty good.”

“I’m just really proud of playing with these guys, really happy to have been part of this team,” said a disconsolate Yegor Sokolov. “They won the gold, and we won the silver. You can say a lot of things, but it’s really like that.”

It took half the game to get a goal, but after that the fireworks started to produce a game in which Russia built a 3-1 lead with eleven minutes to go. But Canada stormed back with three late goals to win gold and avenge their worst loss ever at the U20, 6-0 to this same Russian team a week and a half ago.

Canada was lucky it came out of the first period in a scoreless tie. Well, not lucky, exactly. Nolan Foote hit the post on a quick rebound in the first minute, and then teams exchanged power plays. But then Canada incurred three consecutive minors, putting the team on the defensive end for the better part of six minutes.

The Russian power play had a tough time getting shots through the incredible shot-blocking bravery of the Canadians, however, and the few times they did Joel Hofer not only made the save, he held the puck. Nary a loose puck or rebound.

“They had all those power plays, and our penalty kill was huge for us there,” Dylan Cozens noted. “We knew that if we were just going to play like that the whole game, it wasn’t going to be good. So we had to watch our sticks more, watch us holding them, and just play hockey. I think everyone just had so much adrenaline. The fans here were always cheering for us. It really got us excited. We wanted to win for them. Our penalty kill was huge for us. We gained momentum off that, and we just rolled with it.”

The Russians skated freely by the Canadian defence early in the second and created three great chances, but Hofer was a bit better on each. Alexander Khovanov burst by his man to get a good shot, and later, on a power play, both Kirill Marchenko and Ivan Morozov had great chances that Hofer stopped.

The Russians opened the scoring on another man advantage. A Yegor Zamula shot was touched in front by Nikita Alexandrov, and the game had its first goal.

Soon after, Canada tied the game on a two-minute five-on-three when two Russians took separate penalties on the same play. Alexis Lafreniere took the original shot and Dylan Cozens pushed home the rebound at 11:01.

Less than five minutes later, though, the Russians pulled ahead again on another rebound. This time it was Grigori Denisenko jamming the puck over the goal line with Hofer down.

Canada had the better of play the rest of the period, but Miftakhov made some nice saves, particularly a left pad kick on a one-timer by Liam Foudy.

Canada started the third on the power play, but nothing came of that. It then had a sensational chance to tie the game when Connor McMichael had a cleat breakaway, but he was stoned by Miftakov.

The Russians then increased their lead at 8:46 when Ilya Kruglov made a nice pas from behind the net to Maxim Sorkin in front. He wired a great shot over Hofer’s shoulder to make it 3-1.

Canada, though, struck back just 34 seconds later. A desperate shot on goal by Calen Addison deflected off McMichael’s leg an in, igniting the pro-Canadian crowd and giving the team new life.

And then the captain struck for the tying goal – on a power play, no less. Addison set him up with a soft pass to the back side, and Barrett Hayton, who was playing hurt, nailed the top corner to make it a 3-3 game at 11:21. The rest of the game felt like overtime – next goal wins.

“He’s been phenomenal the whole tournament,” said Joe Veleno. “He carried the weight a lot offensively and he’s been great at both ends of the ice. So he’s a great leader and a great person and an unbelievable hockey player. It shows a lot of character for him to come play this game a little banged up. A lot of credit goes out to him.”