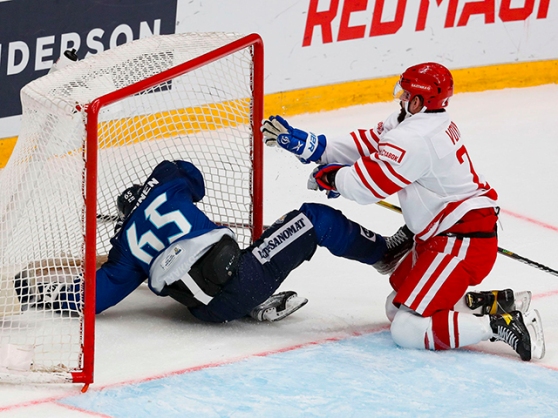 In a dramatic battle, Russia only managed to claim one point against Finland in the concluding match of the 2021 Channel One Cup in Moscow, conceding a narrow 3-2 defeat in overtime.

It was a somewhat uneventful first period. Eager to please the packed CSKA Arena, the Russians competed on the front foot, but barely any realistic scoring opportunities were created as Finland managed to close all shooting lanes in their zone. For their part, the top line consisting of Teemu Hartikainen, Sakari Manninen and Markus Granlund was regularly causing the home defence problems when presented with counter-attacking chances.

The Finns did take the lead in the penultimate minute of the frame.

As a goalmouth scramble erupted on the Russian crease, Waltteri Merelä managed to find the puck and squeeze it over the line.

Finland really should have doubled their money at the start of the second stanza. On the power play, Granlund seemingly had an empty net to aim at on the crease, but he was denied by an incredible save by Ivan Fedotov with the left pad.

That missed chance proved to be a hugely important moment in the game.

Despite the Finns competing in an organized manner, our players did gradually create more goalscoring chances, with Nikita Gusev notably failing to beat Säteri when completely clean through. Nevertheless, with a little over four minutes remaining in the period, Russia did grab that elusive equalizer.

Unmarked to the right of the crease, defenceman Artyom Minulin expertly slotted the puck into the gaping right corner with the goaltender beaten after Mikhail Grigorenko’s initial slap shot had struck the opposite post.

In the 45th minute, Finland took their second lead of the afternoon, as Sakari Manninen bundled the puck past Fedotov from a tight angle on the left wing.

The visitors were in control for the vast majority of the third frame, calmly keeping our players at bay and not allowing them to test Säteri on a regular basis. However, with less than four minutes remaining, Russia managed to tally their second equalizer and consequently force overtime.

At the blue line, Vyacheslav Voinov drew his stick back and lashed an unstoppable one-timer high into the net. Initially, the goal was ruled out for goaltender interference, but it was subsequently given after two video reviews.

Finland did have the last laugh, though, as Manninen was credited with the winning marker in the ensuing extra period as he was fouled against when pulling to the empty net after Fedotov had been pulled for the extra skater.

The Finns have indeed finished in first position of the tournament with a perfect record, with Russia just behind in second.