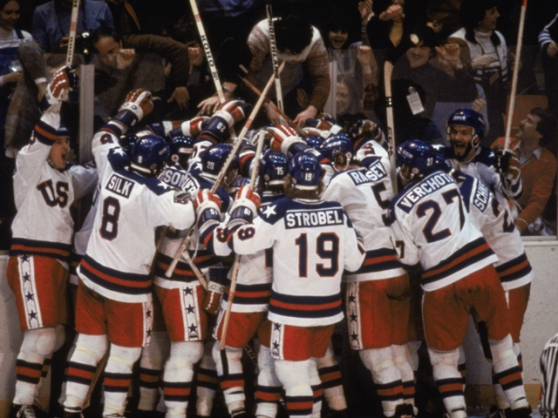 It has been consistently voted one of, if not the, top moment in American sports history. The IIHF named it their #1 moment in their history as part of their 100th anniversary celebration in 2008. The game is still used as a source of inspiration for players of all sports across the world, and it helped to inspire a new generation of American hockey players and fans watching the upset of the century unfold. Yes, the game where an upstart American squad of amateur and college players, who shocked the Soviets, and the world, en route to Olympic Gold and the International Hockey Lineal Championship.

Do you believe in miracles?

Even before the games had begun, the hype for this matchup in the Olympic round was paramount. It was obvious that U.S. coach Herb Brooks had prepared the team for just this match-up, encouraging a physical, open game to match the Soviet style of play, intended solely for the USSR. But the fact that the game happened, let alone due to the results of the Preliminary Round, was stunning in itself, as there were doubts leading up to the games that the Soviets would even attend, after U.S. President Jimmy Carter declared the U.S. may withdraw from the 1980 Summer Games in Moscow over the Soviet invasion of Afghanistan in 1979, expecting an Eastern Bloc retaliation in Lake Placid. But the Red Army did arrive, and walloped a stunned U.S. team at Madison Square Garden in New York City in a 10-3 exhibition rout just before the Games begun.

Once the teams did clash in the first period, it was obvious this was going to be a physical, wild matchup, with many of the Soviet key starters playing amongst their first games of the tournament, being rested in the Preliminary Round by Soviet coach Viktor Tikhonov. The Americans went goal-for-goal with the Soviets, answering Vladimir Krutov’s opening goal with a Buzz Schneider tally. Sergei Makarov put the USSR up 2-1, but Mark Johnson would pounce on a rare rebound from Vladislav Tretyak to tie the game with one second left in the first.

This miscue from Tretyak would be huge for the Americans, as Tikhonov, in what he would later claim to be the biggest mistake of his career, replaced the all-star netminder with his backup, Vladimir Myshkin, to start the second. The Soviets entered into their more dominant style of play, outshooting the U.S. 12-2, and capitalizing on one of three power plays with a Alexander Maltsev goal to lead the game 3-2 at the end of forty minutes. While trailing, the U.S. was managing to stay alive, down by only one goal while being outshot 30-10, on the heels of a spectacular performance by goaltender Jim Craig.

While the Soviets were still outshooting the Americans through most of the third, the Americans fought to outskate and overpower The Red Machine, and on a rare power play, Johnson scored his second of the game with only eight seconds left on the extra-man advantage to tie the game at three. And while a team is always expected to carry momentum after a game-tying-goal, especially in circumstances like this, nobody could have expected what the Americans did next. Redirecting a bouncing puck in the Soviet zone, captain Mike Eruzione used Soviet defenceman Vasili Pervukhin as a screen on Myshkin, snapping a wrister past Myshkin’s blocker side a mere 1:21 after the Johnson goal, putting the Americans ahead 4-3 with exactly ten minutes to go.

The Soviets began to panic, wildly putting together broken plays, but continuing to pepper shots on Craig. However, the U.S. maintained their game, actually continuing to attack on offense rather than sitting back in defensive fashion. Tikhonov refused to pull Myshkin in the dying minutes of the game, as the Soviets typically did not utilize an extra attacker, greatly helping the Americans’ chances.

With the Americans working the boards to regain puck possession, a raucous crowd at the Fieldhouse began to count down the dying seconds, repeated on the broadcast by Al Michaels – along with his now legendary call which would give the game its historic nickname, “The Miracle on Ice.” The clock hit zero, the Americans poured on to the ice in jubilation, and Herb Brooks went to the locker room to cry tears of shock and joy. The Americans had topped their own “Miracle” from 20 years earlier with one of the most stunning upsets in sports history.

With the win, coupled with a victory over Finland two days later, Team USA became the first American squad since the 1960 American team to unify the Olympic Gold and IHLC, and also helped to end a 2+ year undefeated reign the Soviets began at the 1978 World Championships – for more, check out the IHLC @ Olympics & Invitationals page. The Americans’ win was the start of their 10th IHLC reign, their first since a 2-day reign at the 1976 World Championships.

The USSR entered Lake Placid as IHLC champions, tallying lopsided wins over Japan, Netherlands, Poland, Finland and Canada en route to the medal round, before losing the IHLC to the Americans. This was the 19th IHLC meeting between the Soviets and Americans, and only the second ever win for Team USA, with the first coming at the Squaw Valley Olympics twenty years earlier, considered its own “Miracle” in its own right, until overshadowed by this much more dramatic (and politically important) victory.