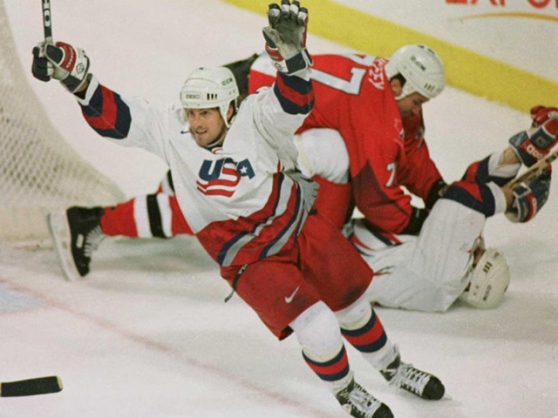 By 1996, the United States had replaced the Soviet Union / Russia as Canada’s principle international rivalry. In part this was because the breakup of the Soviet Union in 1991 had rendered the Russians more vulnerable and not as dominant. In part, the rivalry had been as political as it was sporting, so without the cloak of the Iron Curtain, the two countries weren’t nemeses any more.

And, in part, it was because of the emergence of the U.S. as a true hockey power. Canada had defeated the Americans — not the Soviets — in the 1991 Canada Cup, and the core American players from that team were now in their prime in the 1996 World Cup of Hockey.

Indeed, USA had a perfect 3-0-0 record in the round robin in 1996, one of those wins at the expense of Canada (5-3). Both countries won their semi-finals matchups, Canada beating Sweden 3-2 in a sensational overtime game, and the Americans winning more easily over Russia, 5-2. (Strangely, four of the USA’s seven games ended in victory by that 5-2 score.)

This set the stage for an all North American best-of-three finals. Canada won the first game 4-3 at the new CoreStates Center in Philadelphia, a game that ended dramatically. First, the Americans tied the game with just seven seconds to go and goalie Mike Richter on the bench for the extra attacker, and then Steve Yzerman scored the winner at 19:47 of the first overtime on a play that was later shown to be offside by replay. Game two was all USA – 5-2 – and that set the stage for a one-game showdown at the Molson Centre in Montréal.

Brett Hull, a Canadian by birth and American by hockey, scored the only goal of the first period, and Eric Lindros tied the game for Canada in the second. But in that middle period, Canada dominated in a way few teams at this level have ever done, and the fact Canada didn’t score half a dozen goals or more can be credited almost entirely to goalie Richter, who was in the very prime of his career.

Canada seemed to do what it was famous for when Adam Foote scored at 12:50 of the final period, another dramatic goal for Canada looking like the series winner. But the Americans refused to give up, and Hull tied the game on a deflection in front of the goal. The Canadians protested that it was a high stick that made contact with the puck, but video review failed to convince officials and the goal counted. Rattled, Canada allowed two more quick goals and one more into the empty net.

The 5-2 win gave the Americans their most significant championship since the Miracle of 1980, and the connection was not accidental. Many of the players on that 1996 USA team admitted they started playing the game as kids mainly because of Lake Placid, a turning point in the history of American hockey.