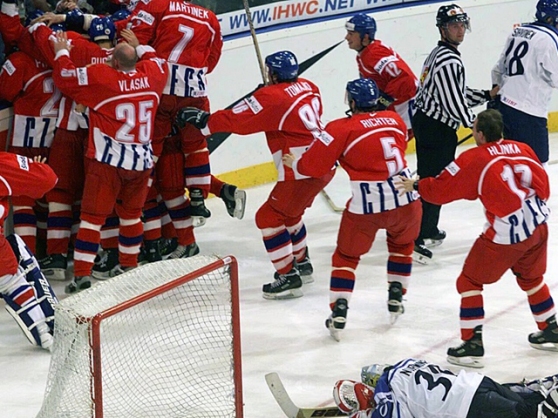 The Czech Republic won its first IIHF World Championship as a new nation in 1996. This started an era of unprecedented success in Czech hockey history. The 1996 Gold medal game against Canada was decided after Martin Procházka scored the winner with 19 seconds left to play of a 4-2 victory. Two years later, the Dominik Hašek-led Czechs won their first Olympic Gold after the Dominator stunned all five Canadian shooters in a shootout in the semi-final and blanked Russia 1-0 in the final.

In 1999, the Czechs needed an overtime goal form Jan Hlaváč to win the best-of-two finals against Finland after defeating Canada in a shootout in the semi-finals, but in 2000, they were clearly the better team, defeating their brethren Slovakia, 5-3, in a gripping Gold medal game.

Other hockey nations grew increasingly frustrated not by the losses but the way they were losing. The Czechs relied on a defensive system that was virtually impossible to penetrate, and they were deadly on the counter attack. They played hockey with the same speculative cunning as the Italians played soccer and nothing seemed to change in the 2001 World Championship in Germany.

They easily won their Qualifying Round group and the Czechs were surgical again in the quarter-final against Slovakia, winning 2-0. Viktor Ujčík was the hero of the semi-final against Sweden, scoring both the tying goal (2-2) in the third period as well as getting the decider in the subsequent shootout. And just like in 1999, the Finns were the opponents in the 2001 Gold medal game.

The game began as though the Czechs were finally going to run out of their stifling-defensive luck. Juha Lind gave the Finns a first-period lead and they went up 2-0 after two periods after a Juha Ylönen marker. But the Czechs never panicked. Martin Procházka, the hero from 1996, got them on the scoreboard early in the third and Jiří Dopita scored the equalizer with six minutes to go.

Knowing that OT had become a Czech specialty, there was no one in the Hanover arena who reasonably believed that the Finns could pull out a victory in extra time. The Finns had an early power-play in the overtime and they had a flurry of chances, but the inevitable happened midway through the 20-minute fourth period. Pavel Patera found David Moravec in the slot, and Moravec’s backhand shot beat goaltender Pasi Nurminen. Sudden death. Over. The Czechs won, 3-2. They became the first – and so far only – team to win three consecutive World Championships since the Soviet Union era in the early 1980s.

Not only had the Czechs won all five Gold medal games in which they participated since 1996, but they had in the process won all five overtime games they had played (three shootouts and two sudden-death goals). The Czechs’ reign ended the next year as they – now as heavy favourites – were defeated 3-1 by an unspectacular Russian team in the 2002 World Championship quarter-final in Sweden.