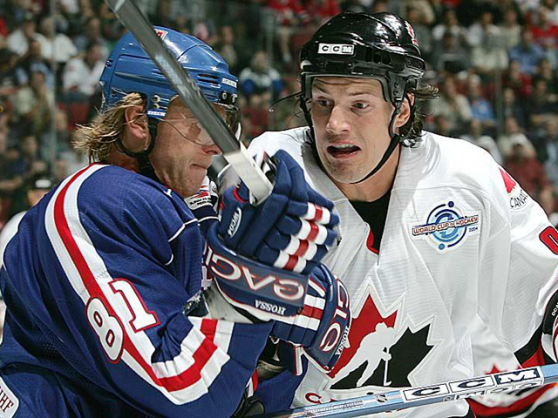 People of Canada, if you ever doubted that the 2004 version of Team Maple Leaf wasn’t ready to win this World Cup, understand now that it’s OK to dream about it. Just be cautious.

Sure the Canadians thrashed an injury-depleted Slovak team, 5-1, at the Bell Centre Wednesday night. But the score doesn’t really explain where Team Canada is at this stage of the 2004 World Cup tournament.

What the match revealed was this: Team Canada comes equipped with the tools to manage the bumpy road and the super-highway. Canada gutted out a 2-1 back-alley victory against the Americans Tuesday and followed that result with an artistic display against the Slovaks.

When teams have to step out on the ice against Wayne Gretzky’s latest model, they will be forced to pick their poison. Add to that the likely possibility that Canada will play all their single-elimination games on Canadian soil and you have the recipe for another major piece of hardware being added to Canada’s shop.

Once again the partisan crowd sang the Canadian national anthem and once again their boys fed off the emotion and used it to overwhelm a flat opponent.

Joe Thornton opened the scoring 3:02 into the match when he pounced on a loose puck, wheeled in the right circle and beat Slovak goaltender Rastislav Staňa between the pads.

“Joe Thornton’s line set the tempo with their goal,” forward Ryan Smyth said. “We started getting rolling. For the first period in all the games we’ve played good hockey and our second period we’ve lagged a little bit. There’s always room to improve, but we played a 60 minute game tonight.”

Canada really only needed five of those 60 minutes because at the 4:43 mark Smyth set up behind the Slovak net and decided that he could walk to the front of it and not get touched. His plan worked, especially when he turned and beat Staňa between the pads. Smyth would add another tally late in the game.

To Slovakia’s credit, they didn’t waver.

“The mistakes we made at the beginning of the game changed things,” Slovakia coach Ján Filc said.

Marián Gáborík took off on a breakaway at the 12-minute mark only to be thwarted by Martin Brodeur. Each player was named Player of the Game for their respective clubs.

For much of the period, the Slovaks did a decent job of generating the odd chance and by the end of the period it appeared as though they had gotten any opening-game jitters out of their system.

But the second period proved their undoing. Martin St-Louis jumped on a turnover at the Slovak line and skated in on a quick 2-on-1 with Simon Gagné. Ottawa’s Zdeno Chára back-checked his way into the play and used his telescopic reach to deflect St-Louis’ centering pass, but the puck bounced right on to Gagné’s stick and he slammed into the left side of the net to make it 3-0 with more than 15 minutes to play in the period.

St-Louis notched his second of the night 58 seconds into the final period when he teamed up with Tampa linemate Brad Richards and one-timed a gorgeous cross-ice pass from the lower right circle.

Slovakia finally broke the shutout when Tampa’s Martin Cibák scored at 4:53 of the third to make it 4-1. Smyth added the fifth goal of the game at 7:11 and narrowly missed a chance for a hat trick with a minute to play.

If this tournament is about getting better each game, Slovakia certainly needed last night’s affair to sort things out. They are missing star players in Ziggy Pálffy, Michal Handzuš, Peter Bondra and a serviceable defenceman in Ivan Majeský.

It was learned last night that Montréal scorer Richard Zedník was sent to hospital with food poisoning.

“We hoped we would replace them with younger players,” Filc said of his injured stars. “But we need some time to find the best compilation of these guys.”

Still, the Slovaks created their chances via Gaborik and Miroslav Šatan who had two excellent opportunities thwarted by Brodeur.

But, Canadian fans, this is why you must dream cautiously: Canada lost yet another defenceman last night. This time Ottawa’s Wade Redden was felled by an injury in the first period, whittling Canada’s defensive ranks to six.

Scott Hannan stepped in to replace Ed Jovanovski who was lost to tournament-ending knee and rib injuries.

“We lost two big ones before,” Quinn said in regards to losing a pair of Norris Trophy winners in Rob Blake and Chris Pronger just before the tournament. “Jay Bouwmeester will step in for us.”

Adam Foote, a stay-at-home warrior and Scott Niedermayer will most likely log the lion’s share of minutes for Canada. Niedermayer, who is solidly placed among the NHL’s elite backliners, is beginning to author a resume that could potentially lead him to the Hall of Fame.

“It’s unfortunate, but we have a lot of depth and Hannan jumped in tonight and played a great, sound game. He showed last year in the playoffs what he can do,” Foote said. “Seeing what (Bouwmeester) did in the exhibition games, he handled it no problem. He’s a great skater and he’s here for a reason.”

The Canadians constructed a checking line with Kris Draper, who stepped in for Brendan Morrow, with Thornton and Shane Doan. With size and grit, this trio could turn out to be the line Quinn sends out against top enemy units.

“I played (Thornton’s) unit against their best and thought they were solid,” Quinn said.

Jarome Iginla is working well with captain Mario Lemieux. The duo teamed up for a glorious chance early in the third period as they worked a give-and-go that forced Staňa to make a remarkable glove save. It is only a matter of time before Iginla and Lemieux do some serious damage.

“They are creating a lot of chances. They should have 10 or 12 goals, but they’re not going in and I really believe that’s going happen,” Quinn said.