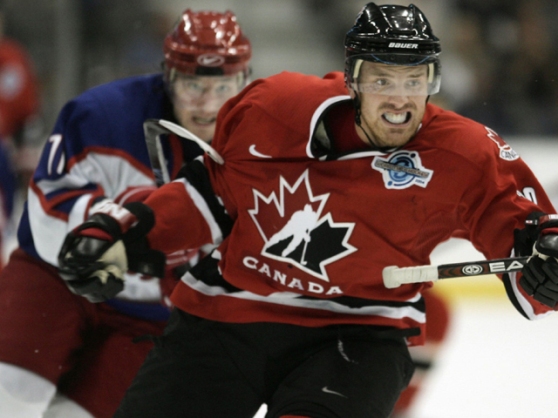 The last time Mario Lemieux played against Russia, it was 1987 and he took a classic pass from Wayne Gretzky and lifted Canada to the Canada Cup in one of the greatest hockey games ever played.

Detroit Red Wings grinder Kris Draper was there that night watching the game. “This is a pretty big thrill, I was one of the fortunate ones to be at that game, I was there at Copps Coliseum (in Hamilton, Ont.) with my father,” Draper said.

This time, Draper was on the ice and he banged home the game-winner as Canada defeated Russia, 3-1, at the Air Canada Centre Saturday night. Lemieux, meanwhile, mustered an assist on a Joe Sakic goal to make it 3-0.

Canada finished its portion of the round-robin with a perfect 3-0 record 32 years to the day that they defeated the Soviet Union in the 1972 Summit Series. Now they will watch the Russia-Slovakia game Sunday to see which team they will draw in the next round.

The only downside to Canada finishing 3-0 is that they will now have to go a perfect 6-0 in order to win the World Cup. The way they played on Saturday night, it’s not hard to see them doing that at this point.

“We’d like to finish first because we can,” Canadian coach Pat Quinn said after the morning skate. “You don’t want to cherry pick who you want to play because quite often it can be a disaster.”

Unlike Canada’s first two opponents in Slovakia and the U.S., the Russians made it through the first period without surrendering a goal. But, Canada exploded for a shorthanded goal at 3:40 of the second period and an even-strength tally at 5:17 to blow the match open.

On the first goal, Vincent Lecavalier was boxed for cross-checking Darius Kasparaitis. The tough-little defenceman was starting to get under Lecavalier’s skin and the penalty, which took place in the attacking zone, looked like a bad one.

With Russia on the attack, Alexander Khavanov could not hold the puck in the attacking zone. Brad Richards and Simon Gagné pounced on the loose puck and jetted up ice with on a 2-on-1. Gagné fed Richards with a perfect one-time assist and surprise starter Maxim Sokolov could not get across his goal crease in time to make the save.

“We stayed patient after the first period and we stayed in our game and didn’t let them get the lead,” Richards said.

Draper banged home the second goal after Sokolov was forced to make a circus save on a Shane Doan shot.

“We have some great transition too and that’s how we wound up scoring our goals,” Draper said.

Lemieux set up Sakic for a sitter at 5:43 of third period. Super Mario lugged the puck down the right boards cut toward the net and pushed a shot on goal. The rebound landed on Sakic’s stick and he stuffed it into the net for the unit’s first point in this tournament.

“He’s just going out there and getting better every game,” Draper said of Lemieux.

Sakic scored a power-play goal from the point against the U.S., but the Lemieux-Sakic-Jarome Iginla line had come up empty for Canada in this tournament despite generating numerous chances.

Russia climbed back into contention at the 12:46 mark of the third period when Sergei Gonchar beat Canadian keeper Martin Brodeur on the glove side.

“I got a little over confident,” Brodeur said. “I was seeing the puck as big as a beach ball and I got a little too confident. … I wish I could have that one back.”

Brodeur had a right to that confidence because he had to be brilliant several times. At 11:11 of the third period, he dropped to the ice and stacked his pads just as Alexei Yashin got his stick on a perfect centering pass by Pavel Datsyuk. Brodeur anticipated the play perfectly and managed to use the right move with Yashin no more than a foot away.

“It was a key time in the game. That’s what this guy has done all his career,” Quinn said.

And Brodeur was special, too. With Canada leading 2-0 in the second period, Brodeur stopped Alexander Frolov on a shorthanded opportunity.

“Great goaltenders give you the freedom that ordinary ones don’t give you,” Quinn said. ” Marty’s been doing that for his NHL team (New Jersey) and Canadian teams for years now.”

Canada will now have a free day on Sunday as they kick back and await to see who their quarterfinal opponent will be.