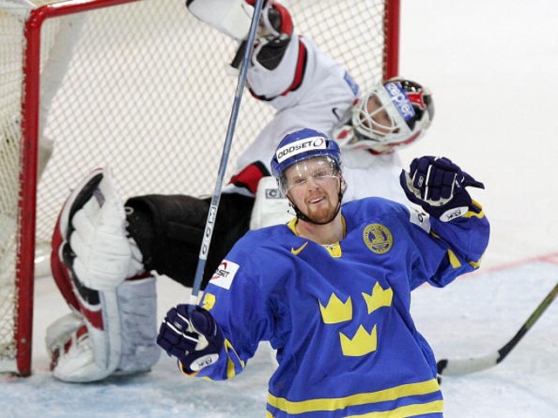 Canada started quickly, but Sweden took advantage of weak defensive play and sloppy goaltending from their opponents to come out on top 5-4 in a Saturday night thriller at the Olympiahalle.

The Swedes were led by Kenny Jönsson and Samuel Påhlsson who each had a goal and two assists. Five different players tallied for Sweden.

It took a few minutes for the players to get going, but after Rick Nash made a couple of big hits, Canada stepped up the tempo and the Swedes responded in kind. The game’s first real chance came near the seven-minute mark when a Swedish defenceman batted down a shoot-in, only to see the puck land behind him on Ryan Smyth’s stick. Smyth walked in alone, but Swedish goalie Henrik Lundqvist made a pad save to keep the game scoreless.

Joe Thornton got Canada on the board at 8:13 when he had the puck behind the Swedish goal. As a true power forward, he used that area not like “Gretzky’s Office,” but more like “Thornton’s Workroom.” He fought off two Swedish checkers, swirled in front on his backhand, and slid the puck hard past Lundqvist.

Less than a minute later, another Canadian line that had been struggling came out and scored a goal of its own, Shane Doan making a beautiful feed to Dany Heatley in the slot. He swiped the puck home to make it 2-0 at 8:48. It was the first goal of the tournament for last year’s leading scorer and tournament MVP.

At this point, the Swedes had consecutive power plays but could not get organized in the Canadian zone. They had no trouble gaining the Canadian line, but trying to get through the defence proved a far more formidable task.

At 16:27, though, they finally cracked the Canadian armour on a wild scramble in front of Brodeur. Daniel Sedin banged the puck home to bring Tre Kronor to within a goal and give his team new life.

“I thought we dominated the first period,” said Ryan Smyth. “We capitalized on our chances.”

The Canadians responded early in the second period when Sheldon Souray kept the puck in at the point by deking a Swedish defender out of his pyjamas and moving in on goal. Lundqvist stopped Souray’s shot, but in a scramble, Shane Doan lifted the puck past the goalie to restore Canada’s two-goal lead.

Sweden got back into the game at 6:56 courtesy of some sloppy work by the Canadians in their own end. Peter Nordström made a rush down the right side, and as he went behind the net, goalie Martin Brodeur tried to pokecheck him. Nordström kept going and Brodeur was out of the net when he swept the puck in front. Samuel Påhlsson drifted the puck into the open net to cut the deficit to 3-2.

A minute later, another defensive breakdown by the Canadians resulted in the tying goal as Mikael Samuelsson walked in from the blueline between two defencemen and ripped a shot between Brodeur’s legs. It gave the Swedes just the lift they needed and deflated the Canadians, who had controlled the play to this point.

Tre Kronor went to the power play a couple of minutes later and had several good chances, notably one from Jonathan Hedström, who put the puck past Brodeur only to watch it sneak out the back side and wide of the goal.

Henrik Zetterberg, bearded à la Peter Forsberg, put the Swedes up 4-3 at 18:27 when he dropped the puck to Samuel Påhlsson, who took a harmless looking shot that Brodeur kicked out. Zetterberg, going to the net, knocked in the rebound as Canada’s defensive coverage was lacking.

Sweden’s penalty killing, which had been perfect to date this year, was put to the test early in the third when Canada had two chances with the man advantage. Tre Kronor killed the first one, but guess what? Joe Thornton made a cross-ice pass to Rick Nash midway through the second one, and Nash, as has been his wont, buried the puck to tie the game 4-4. It was his seventh goal, tops in the 2005 tournament.

The Canadians continued to press and got another power play when Jonas Höglund took a penalty for tripping. Not only did the Swedes kill that off, they also came back and scored what would prove to be the winner thanks to more sloppiness by and in front of Brodeur. He made one save in close, but Samuel Påhlsson made a cute pass to Kenny Jönsson, who beat the fallen goalie. Tre Kronor was back in front, 5-4, with less than six minutes to play. It was a lead they would not relinquish. Canada pulled Brodeur with 45 seconds to go, to no effect.

“They moved the puck around very well,” Smyth said, “but we have to play a little better defensively. You have to give them credit. They battled back. Hopefully we’ll learn from this and carry on.”

“We’re pleased with the win, of course, but it’s only one game on the road to where we want to go,” said Swedish Head Coach Bengt-Åke Gustafsson.

Canada and Sweden both play again tomorrow, the former against Finland and the latter against the USA.