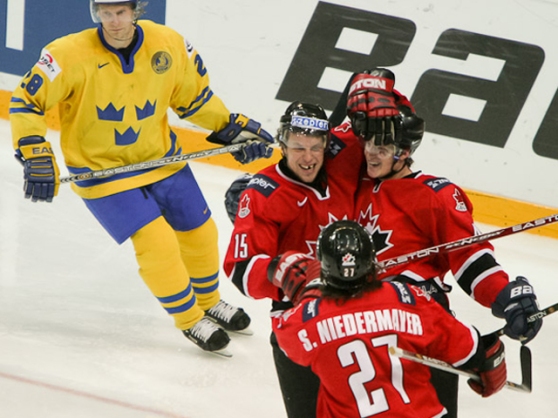 Canada’s colours are red and white and gold, World Hockey Championship gold that is.

Canada rallied from a two-goal deficit twice against Sweden to beat them 5-3 in the gold medal game of the world tournament Sunday.

Canada (7-1-1), captured back-to-back world championships for the first time since the Whitby Dunlops (1958) and Belleville McFarlands (1959) did it nearly half a century ago. It’s also Canada’s 23rd world title, tying the Soviet Union / Russia for the most world championships ever.

The Canadians never stopped working and Canadian character carried the day. “It (character) is an intangible which other countries wish they could identify with,” said Associate Coach Tom Renney. “It has become so much a part of our fabric that we can refer to it.”

The Canadians knew what it was like to trail Sweden by a deuce and rally for a world title. That’s what happened at the 2003 tournament in Helsinki when the Swedes could not hang on to a 2-0 lead and lost 3-2 in overtime.

Like a year ago, the Canadians did not panic when they were in arrears on the scoreboard.

“We never quit and we showed so much character coming back,” said Daniel Brière. “I mean I am sure when it was 3-1, you could feel everybody in the stands saying, ‘That is it. For once they are done. They are done and they are not going to come back from that this time around.”

“I do not know what I can say. It is just amazing what we do when we come together and we decide to play together.”

“It’s typical Canadian character,” said Canadian GM Jim Nill. “We faced adversity throughout the tournament but found a way to get it done.”

With the score 3-1, Dany Heatley roofed a short shot for his tournament leading eighth goal at 14:44 of the second and Rob Niedermayer scored 56 seconds later to tie it. The Swedes were in shock.

The party was on in the Canadian dressing room.

“They say repeating is the hardest thing to do and it is a tough thing,” said Ryan Smyth, who was making his sixth appearance at the world tournament. “We’re not only proud of ourselves in here but we made Canada proud.”

Heatley walked away with the individual honours. He was named the tournament MVP and its most valuable forward. He was a first team all-star and won the scoring title with 11 points in 9 games.

“It’s great to repeat,” said Heatley. “Both years are special. Coming together as a group is such a Canadian thing. We came together and really believed in each other. We fought back and clawed back in the last three games, it’s such an awesome way to win.”

“I love playing for Canada, any chance I get I love putting on the Maple Leaf. It’s a great hockey country and lots of fun to play for.”

Brother Scott and Rob Niedermayer were enjoying the celebrations. It’s been over a decade since they were teammates and to share a world title is something they said they won’t forget.

“Just to be able to play together is amazing,” said Scott Niedermayer. “For my brother, who maybe hasn’t been as lucky as I have in my career, he played like any winning player on any winning team plays. He played as hard as he could. I’m as proud as anyone could be of him.”

And Canadians are proud of the way Team Canada rallied.