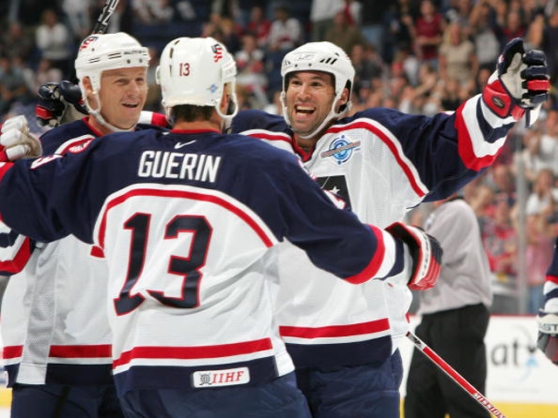 Bill Guerin of the Dallas Stars and Brian Rolston of the Minnesota Wild scored second-period goals and the United States rallied to beat Team Canada 3-1 in a World Cup of Hockey exhibition game Monday night.

Defenceman Jordan Leopold of the Calgary Flames added an insurance goal in the third period and fellow blueliner Brian Leetch of the Toronto Maple Leafs had two assists for the defending World Cup champion Americans, who travel to Ottawa on Wednesday night to face Canada at the Corel Centre.

It was a sluggish effort by the Canadians, who were held without a shot on goal for the first 12:22 of the third period. Canada, with only 10 returning members from the Olympic Gold medal squad of February 2002, was without one of their top two offensive units in Richards-Lemieux-St-Louis.

Rick DiPietro of the New York Islanders got the win, playing 40 minutes of shutout hockey after replacing Ty Conklin of the Edmonton Oilers at the beginning of the second period.

Olympic starter Martin Brodeur looked sharp in the Canadian goal, stopping all 18 shots he faced in 30 minutes 18 seconds of work.

The New Jersey Devils star made several noteworthy saves, stopping Brett Hull and Mike Modano from in-close and kicking away a dangerous slapshot from Chris Chelios in the first period, and in the second period flashed the glove on a screened shot from the point by Ken Klee and knocked away a wrist shot from the slot from Brian Leetch with his left arm.

Canada had a few thousand supporters wearing the Maple Leaf among the crowd of 14,817 at Nationwide Arena, the home of the NHL’s Blue Jackets.

Canada came out strong and enjoyed the better scoring chances in the opening period, the defence pinching in at the right time and keeping the offensive pressure on the Americans.

Heatley, the MVP of this spring’s IIHF World Championship in Prague, opened the scoring on a Canadian power play midway through the first period, rifling a loose puck in the slot over Conklin’s right shoulder.

But the Americans charged out of the gates in the second period and outshot Canada 14-8, throwing their body around a little more and keeping a younger Canadian blue-line on its heels.

Roberto Luongo replaced Brodeur midway through the second period and promptly gave up a goal on his first shot, Guerin’s weak backhand sliding under the Florida Panthers netminder to tie it 1-1.

The Americans took the lead with just under a minute to go in the middle period, Rolston’s wrist shot from the high slot beating Luongo in the top corner over his right shoulder. Luongo headed to the dressing room shaking his head, having given up two goals on four shots.

But he got little help in the final period, the Americans controlling the play and outshooting Canada 12-3. The Americans outshot Canada 34-20 overall.

Leopold made it 3-1 at 13:03 of the third, snapping a shot from the top of the right faceoff circle and beating Luongo stick-side.

The forward line of Simon Gagné, Joe Sakic and Jarome Iginla, so dominant in scoring four of Canada’s five goals in the 5-2 win over the U.S. to capture gold at Salt Lake, was largely ineffective. It’s not every day that you see a player of Sakic’s calibre pass the puck in his teammate’s skates on more than one occasion.

NOTES: Both teams were allowed to dress 22 players each, up from the 20 they’ll be allowed when the tournament officially kicks off 30 August. Canada went with 12 forwards and eight defencemen while the Americans went 13-7…In Lemieux’s absence, Sakic wore the “C” for Canada, while veteran defencemen Scott Niedermayer and Adam Foote were the alternates…The crowd at Nationwide Arena booed heavily when it was announced Lemieux was a healthy scratch.