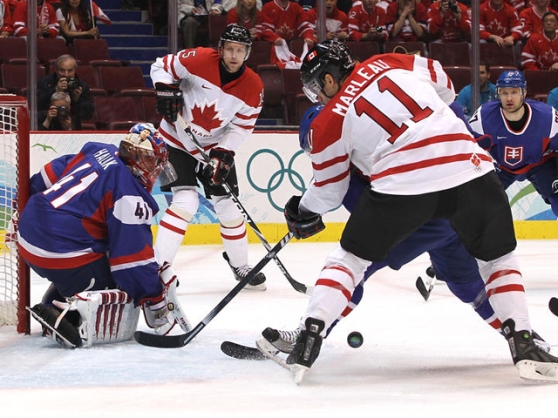 The nerves are on edge again for Team Canada heading into its Gold medal game against the United States at the 2010 Olympics.

Comfortably ahead by three goals with 8:25 left to play, a suddenly shaky Canada allowed two goals and barely survived a wild final-minute scramble to eke out a 3-2 victory over Slovakia in the semifinals on Friday night.

The Americans, on the other hand, will enter Sunday’s showdown on a high after putting six first-period goals past a pair of Finnish goaltenders to remain unbeaten at the Games with a 6-1 win in the other semifinal.

The host nation of these Olympics will be looking to avenge a 5-3 loss to the Americans in round-robin play last week.

Canadian coach Mike Babcock admitted his team “came unravelled a bit” at the end against the Slovaks, resulting in a thrilling finish to what had been a dull game.

But he was able to smile about getting a second shot at the U.S.

“They’re rolling, they just crushed the other team today, so it should be a lot of fun and they must be the favourite going in,” he said in a tongue-in-cheek manner that drew laughter at his post-game news conference.

Canada controlled the play for more than two periods and built a 3-0 lead on goals from Patrick Marleau, Brenden Morrow and Ryan Getzlaf, but a weak goal from Ľubomír Višňovský conceded by goaltender Roberto Luongo opened the door for a Slovak comeback.

When Richard Zedník won a battle for the puck with 20-year-old defenceman Drew Doughty to set up Michal Handzuš for another goal with 4:53 left to play, the momentum had shifted dramatically.

Goalie Jaroslav Halák was pulled for an extra attacker in the final minute, and Luongo needed to make a desperate glove save on his Vancouver Canuck teammate Pavol Demitra to preserve the victory.

Luongo had not needed to be sharp in winning Canada’s first two elimination games of the tournament – wins of 8-2 over Germany and 7-3 over Russia.

But this time he let Slovakia back in a game in which they had barely threatened, and then saw his teammates go into something very much like panic mode over the final minutes.

Babcock simply called it “good experience” for some of his younger players and a reminder that a team cannot let up even when it thinks it has a victory in the bag.

Now Canada faces a U.S. team that has never trailed a game in the tournament and has a goaltender, Ryan Miller of the Buffalo Sabres, who has been clearly the best on any team at the Olympics thus far.

“We have three of the best goalies in the world on our team and what you’ve got to do is get your goalie to play as well as their goalie in one game,” Babcock added. “We’ve got to do everything we can to support (Luongo).

“We were too easy on Miller last time. We won’t be this time.”

For the final, Canada considers it an even slate against the Americans, a team of young underdogs going into the tournament who have impressed with their speed and tenacity.

In their first meeting, the nervous-looking Canadians gave up early goals on freak plays and Miller did the rest.

Now, they hope a home crowd and the six games they have had to jell as a team will help them use their advantage in depth and skill, particularly on defence, to overpower the Americans.

“I don’t think you need revenge when you’re going to the final, to be honest,” said Canadian star Sidney Crosby, who was held off the scoresheet for a second straight game. “You don’t need any motivation at that point.

“The two teams know each other pretty well. There won’t be any surprises.”

The all-North American final comes in the first Olympic tournament played on an NHL-size rink.

The same teams met in the final of the last Winter Games held in North America in 2002 in Salt Lake City, where Canada prevailed 5-2.

“It gives us an opportunity to do something we didn’t do last time,” U.S. defenceman Brian Rafalski said of the Salt Lake defeat.

The final should see plenty of physical play, with American bangers like Ryan Kesler, Brooks Orpik and David Backes trading checks with Getzlaf, Chris Pronger, Shea Weber and other big bodies on the home team.

And the pace of play will likely be as high as it gets in hockey.

“It will be a pretty awesome atmosphere,” added Crosby.

Babcock called it the “rubber match” between the countries, as the Americans beat Canada in the final at the World Junior Championships in January, while Canada beat the U.S. in the women’s final on Thursday night.

Canada outshot Slovakia 28-21, although Slovakia had a 12-7 advantage in the third period.

Slovakia, playing for a medal for the first time at an Olympics, will meet Finland for Bronze on Saturday.

They tried to keep the score down against Canada by staying back and building a defensive wall in front of Halák, and then try to get goals on counterattacks.

“We tried to play a simple zero-zero game,” Demitra said. “After we scored our first goal, we found our energy. We had no energy for the first 40 minutes.”

It had earlier looked like it would be a routine win for Canada, which started nervously but was controlling the play by five minutes in.

Canada finally broke through at 13:30 when Weber threw the puck at the net and Marleau batted it down out of the air and in off the post. The goal was allowed after a video review showed Marleau’s stick was not above crossbar level.

It was 2-0 just 1:47 later when Getzlaf used his long reach to poke a puck to the point, where Pronger shovelled it toward the net and Morrow tipped it past Halák.

Then it was Getzlaf who beat rangy Zdeno Chára to a rebound and put a backhand shot in the top corner at 16:54 of the second frame for only the second shorthanded goal Slovakia has allowed in the tournament.

The Slovaks finished fifth at the 2006 Games in Turin and topped that with an upset victory over defending Olympic champion Sweden in the quarter-finals Wednesday.