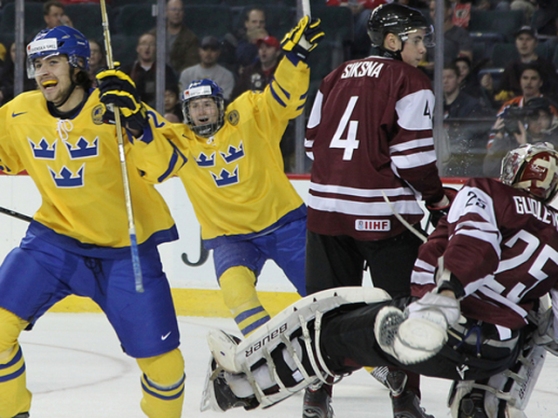 “He’s a coach’s dream player,” said Swedish coach Roger Rönnberg of Friberg. “He always contributes, he always competes. He skates hard and finishes hits. It’s good to see he can score some goals too.”

One of the loudest cheers of the day was for Sweden’s goaltender Johan Gustafsson. Too bad it was drenched with sarcasm.

The crowd at Scotiabank Saddledome mocked Sweden’s goaltender late in the first period when he made a save on a shot from centre ice, this after letting in two goals on the first two Latvia shots of the game.

Luckily for Sweden, Gustafsson’s early struggles didn’t hurt the team as the Swedes rolled to a 9-4 win on the opening day of the IIHF World Junior Championship in Calgary. Sweden led 3-2 after an entertaining, back-and-forth first period and 6-3 after two.

Max Friberg led the way for Sweden with four goals, including a beauty to open the scoring in the first. Friberg one-timed a pass from Johan Larsson at 3:28 of the first period to give Sweden a 1-0 lead. He added a goal later in the first on a tip-in of a Johan Sundström shot. Friberg had a pair of goals in the third period to ice the win.

“Of course I’m happy with the four goals, but I can play better,” said Friberg. “Around the boards and doing other things with the puck, setting up my teammates for better chances. I lost pucks at our offensive blueline, and I can do better there too. Still, before I always had to struggle a little bit before I could get a goal. Now, I was lucky this time.”

Mika Zibanejad scored twice for the Swedes and Sebastian Collberg, Erik Thorell and Joakim Nordström also had goals for the winners, who are looking to improve on a fourth-place finish at the 2011 World Junior Championship in Buffalo.

Toms Andersons scored Latvia’s first goal of the game at the 5:34 mark of the first period, which gave the underdogs – and crowd favourites – a short-lived 1-1 tie with Sweden.

Despite the loss, the Latvians have to feel good about this game, as they kept the score close into the later stages of the game. And, historically, this is Latvia’s best result against Sweden at the IIHF World Junior Championship.

In only two prior meetings between these teams, Sweden hit double digits in each game, winning 10-2 on 30 December 2005 and 10-1 on 29 December 2008. The fact the Latvians scored four goals and didn’t give up 10 has to be seen as a positive.

“We gave it our best effort all the time,” said Latvian assistant captain Zemgus Girgensons. “Everybody knows they’re a more skilled team. We just tried to work hard. We played with hope all the time. They beat us, but we’re proud of our game.”

Roberts Lipsbergs was another bright spot for the Latvians, scoring two goals for the losing team. Latvia’s fourth and final goal came off the stick of Zemgus Girgensons on a power play late in the third. The Calgary crowd, many of whom stuck around for the entire game, gave the Latvians a great cheer. It’s evident that Latvia has won the hearts of many in this city already.

“Now we feel better,” said Latvian captain Kristiāns Pelšs. “We know we can score goals. The atmosphere in the team is much better.”

Latvia’s goaltender Kristers Gudļevskis was the busiest player on the ice, facing 40 shots from the Swedes.

The Swedes, who racked up 26 PIM, will want to cut down in that area in their next game against Switzerland on Wednesday.

“I think we’re dealing with young players who are pumped up for the first game of this World Junior Championship,” said Rönnberg. “They want to compete, and they went over the edge today, taking too many penalties, for sure.”

Ņikita Jevpalovs (Latvia) and Filip Forsberg (Sweden) were named players of the game.