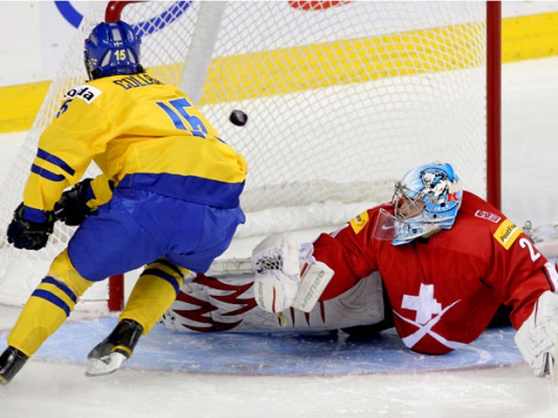 Being two goals down in the third period, Switzerland tied it up and forced Sweden to a shootout and the pro-Swiss crowd shouted for more. But the Swedes had the better nerves, niftier moves at the end and prevailed with a 4-3 win, thanks to shoot-out goals from Sebastian Collberg and Max Friberg.

“We would have liked three points, but Switzerland played a great game,” said Max Friberg, who must today be considered as a fifth-round steal by the Anaheim Ducks in the last NHL draft. “They deserved the point for their effort.”

Sweden, one of the candidates for the gold medals, had what seemed to be a comfortable 3-1 lead in the last period and they munched the minutes pretty well after Ludvig Rensfeldt had scored Sweden’s third goal 1:56 into the third.

But Switzerland was eventually rewarded for their strong performance. Yes, outshot 54-27, but never outplayed and one always had the feeling that the Swiss deserved better.

Joël Vermin, with his second of the game, scored with a two-man advantage with seven minutes left to cut the lead to one, and Dejan Kukac denied the Swedes the three points with his beautiful equalizer at 17:56.

Defenceman Kukan, who plays his junior hockey in Sweden with Luleå, charged in from the left side, skated around Jonas Brodin and beat goalie Jonas Gustafsson to the short side.

The fans at the Saddledome knew that the Swiss were up to something moments before the 3-3 goal when they started their cheer “Go, Swiss, Go”. After all, Switzerland is not considered as one of Canada’s rivals for the Gold.

The five-minute overtime period ended scoreless, despite some good chances from both sides. Sweden’s Mika Zibanejad had maybe the best one with only ten seconds left of OT.

Despite the momentum, and most likely being the less nervous of the teams, Switzerland couldn’t beat goalie Jonas Gustafsson in the shootout. Vermin and Christoph Bertschy missed both their shots, while Sebastian Collberg and and Max Friberg converted with nice moves vs. the superb goalie Lukas Meili.

“Sweden is one of the best teams in the world,” said Swiss coach Manuele Celio. “Now we know that we can play with them. We have to take the positives and bring it to the next game.”

After the deciding shoot-out goal, Max Friberg was soundly booed by the crowd for the “Tiger” Williams riding-the-stick celebration stunt. But Friberg probably couldn’t have cared less. He scored one goal in regulation (his fifth of the championship) and the deciding shootout goal.

“The celebration was not meant against the other team,” said Friberg. “I was just so happy but there were no other teammates to celebrate with.”

“It’s tough right now,” said Swiss forward Joël Vermin, maybe the best player of the game. “But we can be proud of that one point.

Sweden has now five points after two games, while Switzerland’s point here was their first, after losing their first game to Russia 3-0.

“It’s disappointing to lose, but I think that nobody thought we could win against Russia or Sweden,” said Dean Kukan who had a two-point game.

“The crowd really pushed us in the third and in the shootout. We didn’t really expect that. I hope it will be the same in the next game.”

Sweden, who scored four power-play goals against Latvia in their opening 9-4 victory, added two power-play markers against Switzerland. Max Friberg and defenceman Mattias Bäckman, with his first, had the power-play goals while Ludvig Rensfeldt got the third.

Rensfeldt, who assisted on Friberg’s goal, has also five points, with one goal and four helpers in two games.

Max Friberg, who had four goals against Latvia in Sweden’s opener, scored his tournament-leading fifth at 14:23 of the opening period, a power-play marker from the middle of the slot, neatly assisted by Ludvig Rensfeldt.

Swiss goalie Lukas Meili had little chance on the low shot to the far side. This kept Sweden’s PP-record at 100 percent – five goals on as many opportunities that far into the game. It was only in the second period when the perfect record came to an end.

Meili, who played in his first game in the championship, made an exceptional glove save with two minutes left of the period when Rensfeldt was alone in front and had a virtually open net from one metre.

The Swiss finally scored their first goal of the championship 5:14 into the middle stanza when Vermin took a pass from Kukan and beat Gustafsson with a pretty weak but precise shot low to the glove side. It wasn’t a typical power-play goal, as the Swiss forced a turn-over in their own zone and scored off the rush.

It wasn’t surprising that it was Vermin who broke the Swiss impasse. He has had an excellent season with SC Bern in the top Swiss pro league, scoring seven goals and five assists in 21 games. The equalizer came after some heavy hitting by the Swiss, especially from Vermin and his linemate Tanner Richard.

Sweden regained the lead with less than four minutes left of the second period, the third PP-goal of the afternoon. William Karlsson won the faceoff cleanly and Joakim Nordström tipped the puck back to defenceman Mattias Bäckman whose powerful shot eluded the splendid Lukas Meili in the Swiss net.

Sweden earned themselves a two-goal cushion early in the third when Ludvig Rensfeldt, after piling up four assists so far, finally got a goal when he converted a backhand pass from Rickard Rackell.

At that point the game looked all but over, but the Swiss showed some excellent spirit in their comeback and were very well deserving of the one point.