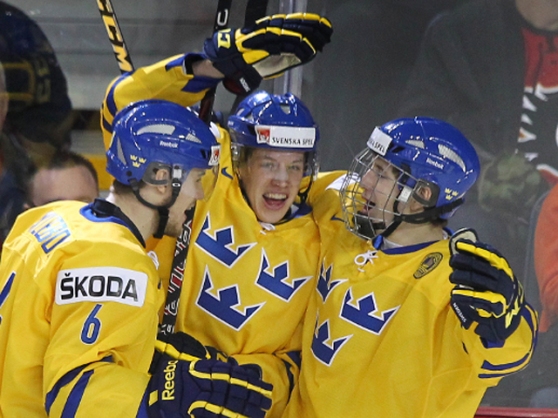 Max Friberg scored his sixth goal of the World Juniors and Sweden went on to beat Slovakia 9-1. Seventeen-year-old Sebastian Collberg and Erik Thorell added pairs. Sweden will battle Russia for a semi-final bye on New Year’s Eve, while the Slovaks will try to escape the Relegation Round.

“What I really liked about our team was the ability to ‘kill the game,'” said Swedish coach Roger Rönnberg. “We just kept on playing and scored goal after goal. Now our goal is to win the group.”

Slovakia hasn’t defeated Sweden in the U20 tournament since 2003, and this was Sweden’s seventh consecutive win against the Slovaks. It also came with relative ease. Slovakia’s hopes of staging a comeback were quelled with 1:31 left in the second period when Johan Sundström scored his first goal of the championship by tipping in a shot from Rickard Rakell.

“This was by far our best game of the tournament,” said Sundström who added two assists for a three-point game. “The score really reflected what happened.”

Sundström’s marker made it 4-1 for Sweden, which controlled the action and added five goals the third period for its third straight win. Shots on goal were 31-9 in Sweden’s favour after 40 minutes, and wound up being 55-15. Anton Forsberg, who made his first appearance in the Swedish net, was good when called upon.

Slovakia will play Switzerland on New Year’s Eve in a game that will decide which team will make the playoffs and which will head to the Relegation Round. Later the same day, Sweden will face Russia for a group win and a bye to the semi-final. Since winning the Bronze medal in 1999 in Winnipeg, Slovakia has been to the Relegation Round on nine occasions.

“It was a bad game for everyone on the team,” said Slovakia’s Marek Tvrdoň. “Tomorrow is a new day.”

Erik Thorell, a player not yet appreciated by scouts but certainly by his coach, scored his second goal of the tournament to give Sweden an early lead. Positioned right in front, Thorell jammed the puck under Dominik Riečický’s pads, and it was a goal the Slovak netminder would like to have had back.

Marek Tvrdoň scored a power-play goal midway through the first period when he nicely picked the far upper corner after taking a pass from Michal Toman to make it 1-1.

But Sweden’s Max Friberg made it clear that he wants to stay in the championship scoring race when he scored his sixth goal at 16:22, a sharp angle shot, assisted by Johan Larsson.

Friberg was also assessed a minor and misconduct penalty for checking to the head and neck area early in the second period and this gave coach Roger Rönnberg to show that his team has not only depth but also scoring power on the fourth line.

In Friberg’s absence, fourth-liner Sebastian Collberg joined the first line with the two Johans, Larsson and Sundström, and both assisted the 17-year old Collberg for the 3-1 goal at 4:15 of the second period.

Collberg and Erik Thorell became their team’s lone two-goal scorers in this game, as they padded the win with the eighth and ninth goals in the late stages

In Sweden’s two first games against Latvia and Switzerland, their power play worked at 60 percent efficiency and this is of course almost impossible to keep up. Against Slovakia, the Swedes were 0-for-4 with the man advantage after two, before Mika Zibanejad netted a PP-goal five minutes into the last period.

“Our team was not skating well, and our discipline was bad,” said Slovak head coach Ernest Bokros. “We had to kill eight penalties. Sweden is a skilled team, and we can’t take eight penalties against a team as good as them.”

Rickard Rakell underscored Sweden’s superiority when he pulled a dirty between-the-legs move on defenceman Adam Jánošík before roofing the 6-1 puck past goalie Riečický.

Now the showdown with Russia looms.

“This game was a perfect lead-up for the game against Russia,” said Friberg.

“Our objective in the game against the Russians will be to stop their individual stars very early on, and to frustrate them,” said Sundström.